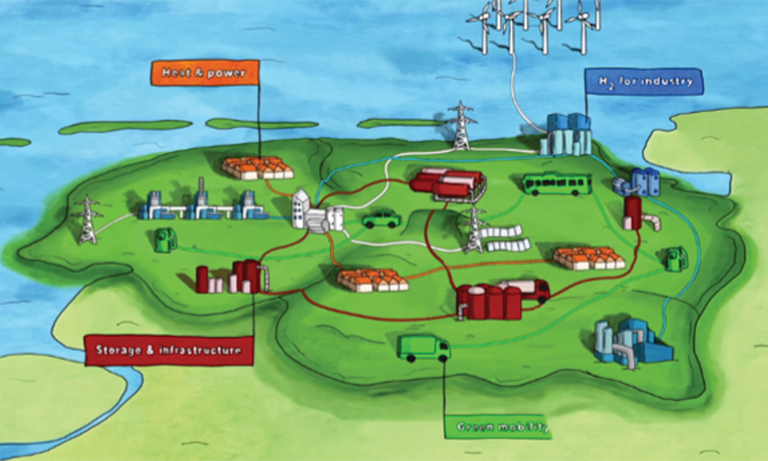 Enea Hydrogen Valley, towards an infrastructural hub in Italy

The ENEA Hydrogen demo Valley project aims to create an infrastructural hub for testing and demonstration of hydrogen technologies covering production, storage, distribution and utilisation of hydrogen and blends of natural gas and hydrogen, for applications in the energy, industrial and transport sectors. The multifunctional infrastructure would be implemented in the Casaccia Research Centre of ENEA, north of Rome, to act as a breeding ground for hydrogen value chain technologies and services with the aim of accelerating their deployment in view of the energy transition and overall decarbonisation. The project kicks off with a 14 million euro investment with Mission Innovation funds and will involve universities, research institutes, associations and companies.

Hydrogen is expected to become one of the building blocks of a low-carbon economy. Several international hydrogen projects, more than 250 funded by the FCH-JU under the FP7 and Horizon 2020, still in progress or already concluded, have made it possible to develop and validate, even in a real environments, single technologies and system solutions as well as to create an extended market of hydrogen ranging from the diffusion of uses in the thermal sector to mobility and industry, or even to address transversal issues such as standardization, legislation and certification, but often without a fully integrated vision.

In parallel with these initiatives, so-called Hydrogen Valleys (localized, large-scale integrated “ecosystems” based on hydrogen as a common vector), co-financed by the European Commission, are under construction especially driven by the industrial sector, in various European countries, aiming at the implementation of hydrogen produced from renewable sources [1,2]. Among these we can mention: the Northern Netherlands Hydrogen Valley initiative, with the development of a 20MW electrolyser and the production of methanol; Rhine-Neckar in Germany, mainly dedicated to mobility; Leeds in the United Kingdom, where the H21 project aims to decarbonise the gas network by substituting increasing percentages of hydrogen for methane to power both domestic and industrial heat users; the H4Heat project in the United Kingdom focused on the economic feasibility and safety related to the use of CH4 / H2 mixtures instead of NG. The topic has gained momentum in Italy as well. Multifunctional demonstrators of a hydrogen ecosystem, of significant size, integrated with real users, are however not yet present in Italy. In Bolzano there is the only Italian hydrogen fuelling station open to the public (for vehicles at 350 and 700 bars), which supplies a fleet of about 20 buses and 15 cars. Near Capo d’Orlando (Sicily) there is a small-scale infrastructure, managed by the National Council for Research (CNR), focused on green mobility with hydrogen produced by photovoltaics, for a minibus and a number of hydrogen-powered pedal assisted bicycles.

At industrial level, SNAM carried out an experimental test campaign near Contursi Terme (near Salerno) on the use of up to 10% hydrogen mixed with natural gas, transported through a section of commercial gas pipeline and serving two industrial thermal generation users [3]. In Troia (in the Apulia Region), as part of the INGRID and STORE & GO projects, the operation of a pilot plant for the production of hydrogen from electrolysis (1MWe) was tested and verified, with the storage of hydrogen in gaseous form and in metal hydrides, used in refuelling stations and fuel cells, and, with the aid of CO2 capture from the air, in the production of synthetic methane, with liquefaction of the gas produced [4]. After conclusion of the mentioned projects, the plant is not currently in operation.

At national research level, CNR and ENEA collaborate in the development of new technologies related to the hydrogen supply chain, with particular reference to Power to Gas applications, as part of the Three-Year Research Plan (PTR) of the "Research on the Electrical System" (RdS) - Program Agreement (AdP) with the Ministry of Economic Development. In this context, ENEA proposed the creation of an integrated Hydrogen Demo Valley (within Casaccia, one of its research centres spread all over Italy) that will be funded by the Ministry of Economic Development in the framework of the Mission Innovation challenge on Renewable and Clean Hydrogen. The project kicks off with a 14 million euro investment with Mission Innovation funds and will involve universities, research institutes, associations and companies, to boost the energy transition and decarbonisation.

Within the Casaccia Research Centre of ENEA two gas pipelines will be laid down, fully equipped with auxiliaries and serving various end uses: one pipeline for pure hydrogen and the other for blends of natural gas and hydrogen. These pipelines will connect the sources of hydrogen production (driven by renewable energies) with the end use applications distributed throughout the centre to give rise to a true hydrogen ecosystem.

Specifically, a 200 kWp photovoltaic plant will be installed coupled to a 200 kWe electrolyser for the generation of green hydrogen to be used in pure form or blended with natural gas in the respective pipelines. Innovative systems for hydrogen production will be identified and implemented (solar reforming, high-temperature electrolysis, etc.) that can be hooked up to the pipelines. End use applications will consist of boilers, a microturbine and fuel cells for blend utilisation, and of a hydrogen refuelling station (HRS) for the pure hydrogen, as a mobility hub for people and goods within and outside the centre, as well as heat and power and storage applications.

A real hydrogen network will therefore be developed with the aim of testing diverse technologies as well as operation strategies for supply and demand matching, as well as to provide R&D and engineering services for industrial players in need of to-scale validation of their products in a holistic environment. A network of sensors will be introduced for the monitoring of the pipelines and, at a higher level, an all-encompassing system for data acquisition and analysis (HW and SW), both for integrated management of the Hydrogen Demo Valley and for categorizing information in view of possible replication in similar contexts.

Finally, in-depth studies, analyses and engagement will be carried out vis-à-vis the regulatory and normative dimension of the Hydrogen Demo Valley, in order to systematically address safety matters, permitting and other administrative procedures, as well as public acceptance of hydrogen in all its aspects.

The main goal of the project is to create an integrated infrastructure that aims to demonstrate the feasibility, functionality, sustainability, resilience and safety of a hydrogen-based ecosystem, as well as to offer industry the possibility to experiment and validate, in a dedicated ecosystem, the technological solutions with different TRLs, on a significant scale.

Specifically, it is planned to build and operate multifunctional infrastructures that will allow, with a technology neutral approach, the demonstration and integration of hydrogen technologies to help achieve energy transition objectives in the short and longer term.

The objective is therefore to create and test, within this framework, the integration of processes and infrastructures relating to different links in the supply chain:

Parallel and transversal objectives are:

The ENEA Casaccia Research Centre is a geographically circumscribed area suitable for the creation of a hydrogen ecosystem that, at the same time, represents a replicable cluster for the implementation of integrated projects for production, transport and use of hydrogen based on coordinated management strategies. In the timeline of three years, the main result of the project will be the creation of a multipurpose platform for testing and validation of technologies related to the hydrogen supply chain as a whole. The expected results will be of a systemic nature, but will also focus on improving performance and the optimized management of each individual component, also as a function of the overall system performance. Another important result will concern the acquisition and processing of data for monitoring the operating status and predictive diagnostics in the field of the entire infrastructure and individual components and subsystems. 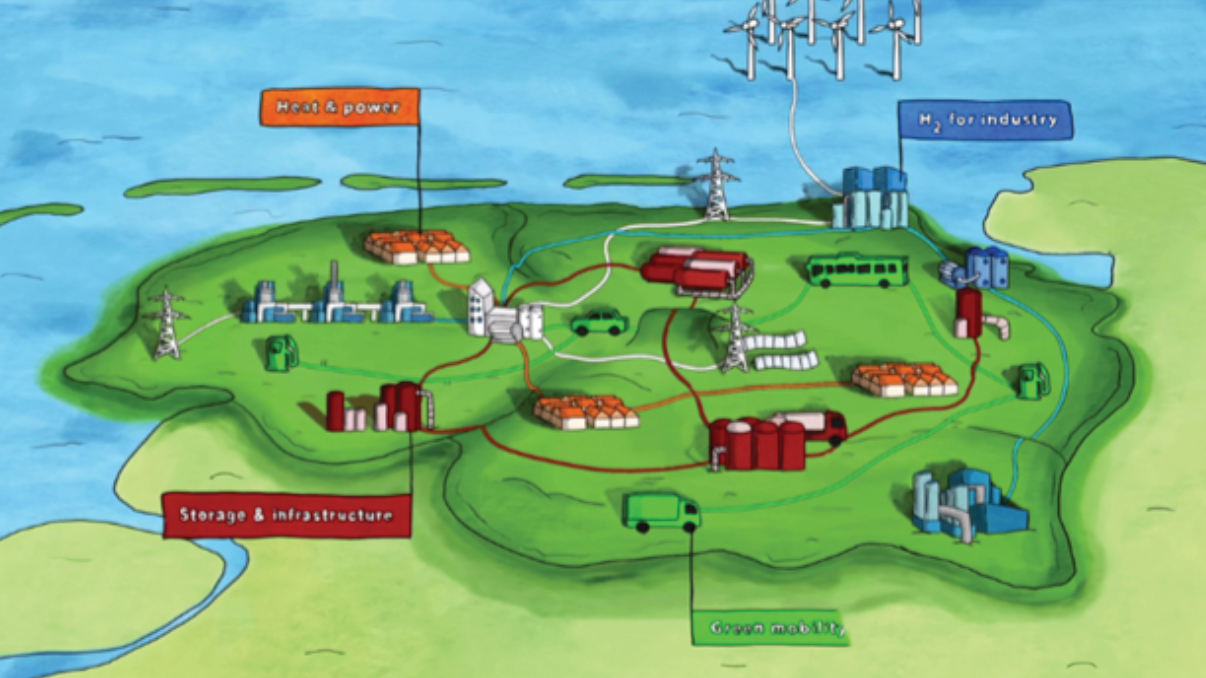