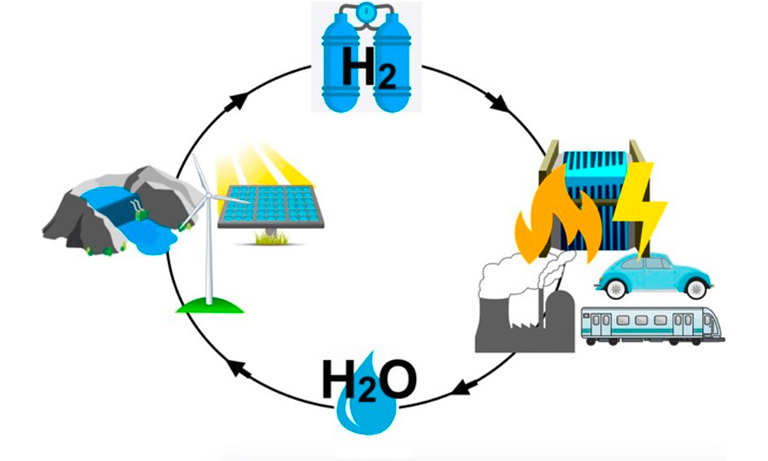 Most of the world hydrogen production is obtained by steam reforming of methane, a thermocatalytic process carried out at high temperatures (>800°C) associated with high greenhouse gas emissions. The environmental impact of this process can be significantly reduced, even possibly achieving net-zero emissions, if the required high-temperature heat is provided with solar energy and renewable feedstocks such as biogas are used. An innovative steam methane reforming process of this type, operating at relatively low temperatures (<550°C), has been developed by ENEA in cooperation with Italian and European partners; the lower operating temperature allows to supply the process heat by means of molten salts, fostering the integration with concentrating solar technologies using the same liquid to capture and store solar heat up to 550°C. The research led to the development and experimental validation of a prototype reformer heated with molten salts, which achieved similar efficiencies compared to the conventional process, despite the lower operating temperatures. This result is obtained through to the combination of a specifically designed catalyst with a membrane to recover the produced hydrogen, which allows to integrate hydrogen production and separation into a single compact process unit.

Today’s global annual hydrogen production is estimated to be around 70 million tons [1], mostly obtained by the steam reforming of methane (natural gas), a process based on two chemical reactions:

Figure 1 shows a simplified block diagram of the process. The Methane feed is cleaned-up (the typical contaminants of natural gas are removed) and mixed with steam. The first reaction is the steam methane reforming (SMR) reaction, a heat demanding catalytic reaction carried out at high-temperature in gas-fired industrial furnaces, where methane and steam are converted to a mixture of hydrogen and carbon monoxide. After cooling, this outlet mixture is sent to a set of reactors where the “Water Gas Shift (WGS) reaction takes place, with the conversion of CO to CO2 leading to additional hydrogen production. The produced hydrogen is then separated (usually by “pressure swing adsorption”, PSA) and the off-gas (unreacted CH4 and CO) mixed with additional methane and burned in the SMR furnace. The process is associated with high CO2 emissions (up to 12 kg per kg of H2 produced) coming from two sources:

The carbon footprint of the reforming process can be significantly reduced by replacing the gas-fired furnace with a concentrating solar thermal system providing high-temperature renewable heat: in this way, combustion is avoided with savings in methane consumption and CO2 emissions. Figure 2 shows the solar reforming concept, where the flue gas is not present and the chemical reactions are the only source of CO2 (5.5 kg per kg of H2 produced), which can more easily be captured compared to the conventional process, in a “blue hydrogen” production strategy. Even more interestingly, if a renewable feedstock like bio-gas or bio-methane is fed to the reactor instead of natural gas, the whole process becomes “net-zero emission” and green hydrogen is produced.

Solar reforming can be seen a renewable-powered fuel upgrading process that converts the methane contained in the feed into a decarbonized gas with a higher energy content. Figure 3 shows the net increase of the calorific value of produced hydrogen fuel (LHVH2 = 244 kJ/mol) compared to methane (LHVCH4 = 802 kJ/mol): the 22% increase is obtained by “embedding” solar energy in the product.

Over the last 25 years, there has been an extensive research and development effort worldwide on the solar reforming of methane [2,3]. The major challenge in the development of solar reformers is the integration with concentrating solar technologies, which can be achieved through different methods. The first approach, followed in the early development stage of this technology, is the “direct solar reforming”, i.e., receivers/reactors were used to capture and convey the incoming highly concentrated solar radiation to the catalytic reaction zone operating at temperatures close to conventional reformers (>750°C) [2]. In this case, the main challenge is the management of transients that affect the operation of the reactor and downstream units, both on a short (cloud passages) and daily timescale. Such transients cause thermal cycling of the receiver reactor components, including catalysts and structural materials, fluctuations in the product gas composition and require daily startup and shutdown operations. All these issues could be more easily managed by using a thermal energy storage (TES) system; however, no consolidated TES solution is currently available for temperatures above 550 °C.

The membrane reformer consists of a shell-&-tube arrangement heated with the molten salt coming from the high-temperature TES tank [5,6]. The TES system overcomes the issues dealing with the mismatch between the fluctuating solar resource and the steady thermal duty profile of the chemical plant and allows to supply the process heat even overnight and during cloudy periods. Additionally, the continuous flow of the HTF in the shell of the reactor keeps the reactor hot in stand-by periods and minimizes start-up/shut down times.

The integration of a membrane inside the reaction chamber allows the continuous removal of hydrogen from the catalytic section, so that significant methane conversions can be attained despite the low operating temperatures (<550°C).

Moreover, the operation at such lower temperatures allows, with the adoption of suitable catalyst formulations, to carry out the endothermic SMR reaction (1) and the exothermic WGS reaction (2) in a single reactor, with consequent advantages in terms of overall thermal efficiency and process intensification. The development of this innovative technology required to face several R&D challenges. After studying relevant process schemes for the combination of Concentrating Solar Thermal (CST) plants with a membrane reformer [5], a prototypal system heated with solar salt has been developed in the project CoMETHy [7]. First, basic components such as the catalysts for the low-temperature steam reforming and hydrogen-permeable membranes were identified and validated [7-11]; it is worth noting that the selected catalysts proved effective for the steam reforming of methane, biogas and ethanol, making the proposed technology flexible respect to the usable feedstock and suitable to produce 100% green hydrogen. Then, the catalyst/membrane assembly was tested by ENEA’s partners in lab-scale SMR reactors [12,13]. Finally, a pilot membrane reformer to produce up to 3 Nm3/h of pure hydrogen from methane steam reforming has been built (Figure 5) and experimentally validated in a solar salt loop [14] built in ENEA Casaccia research center in cooperation with an Italian engineering firm (NextChem SpA).

Experimental results successfully confirmed the potential of the molten salt heated membrane reforming technology up to 550°C [14]: the membrane reformer following a pre-reformer allowed to achieve methane conversions in excess of 60%, despite the low operating temperatures; this value is twice as high as the maximum conversion that can be attained with a conventional reformer operating under the same conditions, with the production of a pure (> 99%) hydrogen permeate stream with < 100 ppm CO content. The WGS reaction approached completion, which results in an outlet retentate stream with <2%vol CO concentration and a relatively high CO2 concentration (>30%vol) [14].

The developments described in the previous sections have been obtained by ENEA in cooperation with National and International partners, in the framework of different projects, including:

First, beside the avoidance of CO2 emissions with flue gases, it is noteworthy that the high CO2 concentration (> 30%vol) in the outlet retentate stream simplifies downstream CO2 capture processes. Therefore, membrane reforming leads to the pre-combustion decarbonisation of fossil fuels in a carbon capture, utilization and storage (CCUS) scenario, thus turning grey hydrogen into blue.

Second, when biogas or biomethane are used as feedstock, 100% green hydrogen will be produced from a combination of renewable sources and at competitive costs compared to traditional fossil-based systems. As a matter of fact, from techno-economic analysis the solar reforming process lead to hydrogen production at costs relatively close to the conventional process as far as the higher investment costs for the installation of the CST unit are balanced by the lower operative costs due to methane savings and CO2 emission fees.

In general, solar-reforming can play a complementary role as back-up source of hydrogen where/when the demand for green hydrogen exceeds the direct offer from renewable-powered electrolysis.

Today, R&D activities on this topic in ENEA are mainly focused on the optimization of the reactor design in the framework of the Electric System Research Programme funded by the Italian Ministry of Economic Development (Implementation plan 2019-2021).

In order to complete the R&D pathway it is necessary to verify performances and stability of the membrane reactor over longer periods (>5,000 hours) for final technology validation on pilot scale, and demonstrate the solar SMR in a real industrial environment, e.g. ammonia synthesis or hydrotreatment units for synfuel production.

Solar reforming of methane or renewable carbonaceous feedstocks like biogas is an alternative and potentially carbon-neutral hydrogen production route, which combines different renewable sources in a flexible way, while keeping competitive costs compared to traditional fossil-based systems. Thanks to these characteristics and without requiring radical technological changes in the current hydrogen production system, solar reforming can be readily taken up by the industry and play a key role in the short-term, by providing a more sustainable approach for the energy transition than conventional SMR combined with CCS/CCU. Furthermore hydrogen produced by solar reforming of renewable feedstocks is 100% green; this technology can play a role also in a fully decarbonized energy system, contributing to the hydrogen offer where/when the demand exceeds the green hydrogen availability from electrolysis driven by electric renewables, such as PV and wind. 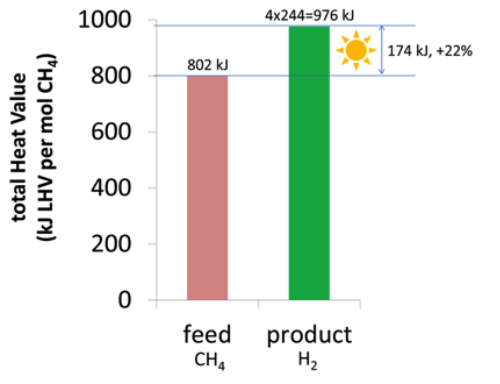 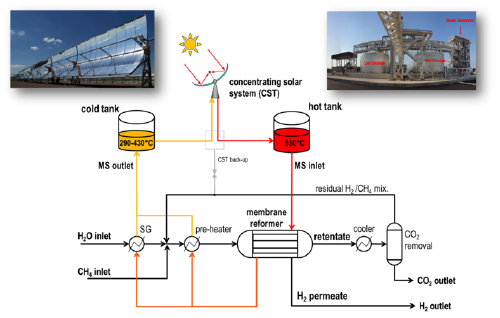 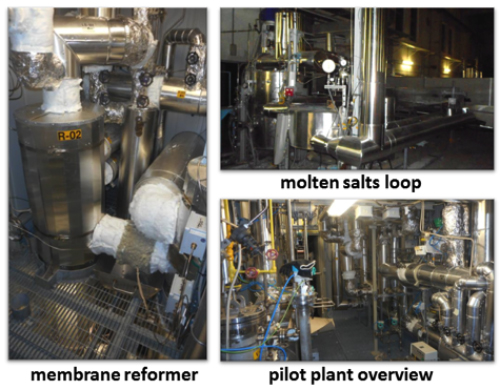