Biological processes can be integrated in the green hydrogen value chain acting with the dual role of producers and consumers. Green hydrogen is produced biologically from organic wastes through Dark Fermentation, a biological process which has some advantages compared to other renewable H2 producing technologies. It is a carbon neutral process which can produce continuously green H2 with low energy requirement, combined with sustainable waste management. Moreover, together with H2, it produces a number of valuable by-products. The use of H2 to convert CO2 to methane is the key bio-reaction of the biomethanation process which allows the enhancement of the conventional Anaerobic Digestion process. Moreover, the consume of H2 as a source of reducing power by microorganisms has the potential of producing a large spectrum of bio-based products of industrial interest. Biological processes play a fundamental role in the development of future waste-based, H2-oriented, bio-refineries.

Biological processes will play a relevant role in the green hydrogen value chain: they participate with the dual role of producers and users of green H2, providing sustainable and renewable technologies for energy and added value products. Green H2 is produced biologically from the valorisation of organic wastes through the Dark Fermentation (DF). As part of the Anaerobic Digestion (AD) process, H2 is a by-product of the first acidogenic conversion of organic matter into volatile organic acids and alchols [1].

H2 can be used to convert CO2 into methane (CH4) through biological means, the so-called biomethanation process [3], a "Power to Gas" (P2G) technology. The biomethanation, as the DF, consists in a "reinterpretation" of the conventional AD process since the microorganisms involved both in the H2 production and in the conversion of CO2 and H2 into CH4, are already present within the community realizing the AD process (Fig. 1).

Moreover, microorganisms consume of H2 as a source of reducing power producing a large spectrum of bio-based products of industrial interest. These abilities can be exploited for the development of biotechnological processes.

ENEA research tackles to overcome the actual bottlenecks to make these biotechnologies truly viable. The main technical limits of DF are both the low yield and the low energy efficiency [2]: due to thermodynamic limitations, only a maximum of 33% of the energy contained in the organic substrates can be theoretically recovered in the form of H2, while yields of 21% are obtained experimentally and most of the energy remains in the form of value-added soluble compounds. Concerning the H2 consuming bioprocesses, the major challenges are related to the low H2 solubility in the media where the microorganisms operate and to the related increase of H2 partial pressure in the headspace of reactors.

The research carried out at ENEA aims at improving the conversion efficiency of poor biomass, such as agro-industrial wastes and by-products, into bio-H2 both by optimising the processes and by developing the concept of environmental bio-refinery. An eco-biotechnological approach based on natural selection rather than on genetic or metabolic engineering [4], is the characteristic of the Working Group on Advanced Anaerobic Digestion Processes [5–7]. Tailored acclimatization strategies are developed to obtain enriched microbial communities and strains from original mixed communities collected from natural or anthropogenic ecosystems and to design artificial consortia exhibiting target functions. For instance, during the project IDROBIO (Integrated Special Fund for Research), a very efficient H2 producing consortium was enriched from costal lake sediments during a continuous process [8]. It showed high substrate versatility being effective both on simple sugar [5] and complex substrates in co-digestion (cheese whey, crude glycerol, buffalo slurry) [9] (METISOL project co-funded by the Italian Ministry for the Environment). In the context of the Italy/China Executive Programme, a stable functional consortium able to efficiently convert crude glycerol, a by-products of biodiesel industry, into H2 and ethanol (patent n° RM2011A000480) was enriched from activated sludge after several months of adaptation on crude glycerol [10,11]. The further optimization of the process conditions, developed during the EU-FP7 project GRAIL, allowed to simultaneously reach very high productions of H2 (21±2 L/L) and ethanol (39±1 g/L), by a non-sterile fed-batch fermentation mode using crude glycerol as the unique carbon substrate. Very high yields, both close to the theoretical maximum yield of glycerol = 1 mol/mol, were obtained (Fig. 2).

In the context of the IDROBIO project and the Electric System Research Programme (funded by the Italian Ministry of Economic Development) bioaugmentation was successfully applied to improve the H2 production (4 times both the yield and the rate) from vegetable wastes by re-inoculating, both individually and in a constructed consortium, three H2 producing strains [12], previously isolated and enriched from the same types of vegetable wastes [13]. To boost both the hydrolytic and the H2 producing steps, during fermentation of recalcitrant (lignocellulosic and chitinous) wastes, bioaugmentation with hydrolytic anaerobic fungi strains combined with a H2 producing consortium was successfully designed, leading to 75% increase of the H2 yield, during a two stage configuration of anaerobic digestion process [14]. Experiments aimed at scaling up (10x and 100x) the obtained results were also performed and used to set up a simplified mathematical model to simulate the kinetics of the process [15].

Indeed, the ENEA team also carry out the validation of laboratory results to the industrial stage by setting trials at the pilot scale. This was the case of the two-stage pilot plant (ENEA/CREA Patent n° 0001416926), which consists of a fermentation reactor coupled with an anaerobic digester, functioning with cheese whey and animal manure (Fig. 3). It was built in the context of the project MAREA (co-funded by the Italian Ministry for the Agriculture), for the simultaneous production of H2 and CH4 in a cascade process for the complete exploitation of waste streams, within a bio-refinery framework. Beside the added value of producing also H2 instead of CH4 alone, the two-stage process presents several advantages compared to the conventional one-stage AD process: higher stability, higher energy yield and higher organic loading rates, all factors contributing to subsequently increase the CH4 productivity [16]. This was demonstrated in a 50 L pilot plant treating dairy wastewater in the context of the project METISOL. The separation of H2 and CH4 phases allowed an increase of more than 26% the CH4 production rate, together with 30% increase of the yield of and 20% increase of CH4 content in the biogas.

Since 2018, the research team is also studying the biomethanation process, with the aim of developing innovative technologies for "in situ" biogas upgrading to bio-CH4, to improve the conventional AD plants, significantly reducing the costs associated with the gas cleaning process (Electric System Research Programme). For this purpose a novel hybrid gas-stirred tank reactor (Fig. 4) was developed with a partial immobilization of the microbial community [17]. The new system allowed the enrichment of CH4 in biogas from 50% to 80% with a CO2 residue of approximately 7%, during the treatment of cheese whey.

Currently, studies are conducted (AZeRO project, Electric System Research Programme), in collaboration with players of the industrial sector, to evaluate the effectiveness of DF and AD treatments in degrading specific organic micro- [18] and macro-pollutants [19]. Moreover, experimentations on H2 fermentation by acetogenic bacteria for the production of bio-based building blocks (acetic acid and alcohols), are also carried out (COMETA project) in the framework of the Syngas bio-refinery.

Compared to other renewable H2 producing technologies, DF of organic wastes has some advantages because it is a carbon neutral process which can produce continuously green H2 with low energy requirement, while allowing sustainable waste management with pollution control. Moreover, it could become an important opportunity for future bio-refineries because potentially able to produce, together with H2, a number of valuable by-products.

Waste biomass potentially represents an abundant resource, locally available, for the decentralised production of renewable and clean H2 [19], which can be directly used in fuel cells for producing green electricity at a local level or, alternatively, to boost the decarbonisation of the gas grid. A mixture of bio-H2(≤ 10%) and bio-CH4, produced by a new generation of advanced AD plants, can be injected into the natural gas network with the additional benefits of reducing the import of fossil CH4 and improving the gas fuel combustion process in terms of flame velocity, stability and reduction of CO and NOx emissions [1].

In the near future, bio-H2 or H2 produced by the excess of renewable electricity from non-programmable sources will serve to improve the existing AD plants, which are widely distributed (more than 2100 DA plants distributed throughout in Italy) transforming electrical energy into easily stored chemical energy (P2G). Compared to other methanation processes, biological processes (biomethanation) are particularly interesting because they can be used in plants with medium-small size like most of current biogas plants in Italy [3].

ENEA’s activities range from the study and understanding of the basic mechanisms of microbiological systems for the control of bioprocesses, to the design and development of pilot scale prototypes in relevant environment, in order to satisfy the market requirements. Consequently, ENEA’s researchers are closely cooperating with the CIB (Italian Biogas Consortium) and with players of the industrial sector and boast partnerships with industries supplying different kind of organic waste.
Research efforts at ENEA are now aiming at improving the conversion yields of complex biomass.

Researchers’ objective is to develop a marketable process, based on freeze-dried microorganisms, to increase the production of bio-H2 and bio-CH4 from biomass with a high content of lignocellulosic component.

Regarding the “in situ” biomethanation, the research activity is currently devoted to further reduce the CO2 content to a maximum of 3%, in order to obtain a final mixture of H2 and CH4 with characteristics that make it suitable to be introduced into the gas network or used as biofuel for transportation, without requiring an expensive upgrading stage.

Experimental trials on a 1 m3 pilot plant (Figure 5) will start within the current year by using, in addition to the dairy wastewaters, other substrates of potential interest (municipal waste and biomass from agro-industry). In order to create a flexible system for testing, in the short term, the innovative technological solutions in existing biogas plants, H2 will be produced locally by means of an electrolyser powered by photovoltaic.

Finally, to overcome the limitation of H2 solubility in the fermenting mixture, ENEA researchers are planning to test solutions based on “in situ” H2 production by new electrochemical or bio-electrochemical means.

Although bio-hydrogen is not developed at the market level, yet, its production seems to be particularly suitable for decentralised small-scale systems, integrated with waste from agriculture and food industries or from waste-processing facilities.

The best short term opportunity is to convert the fermentation by-products to CH4 by anaerobic digestion. Thus, in a near future, the most realistic scenario is that DF and biomethanation will both contribute to the establishing of “second generation” AD plants (newly built or from the revamping of existing plants, which in Italy can be well over a thousand) aimed to the production of “green gas” rather than renewable electricity.

The future of DF as a core technology for hydrogen generation lies within the concept of the environmental bio-refinery. In this perspective, a strong policy, regulatory framework and finance (hydrogen-based) associated to improve the efficiency of DF systems (optimization of reactors design and operation and, most important, hydrogen productivities and yields) will guarantee the economic feasibility of waste valorisation by DF [1]. 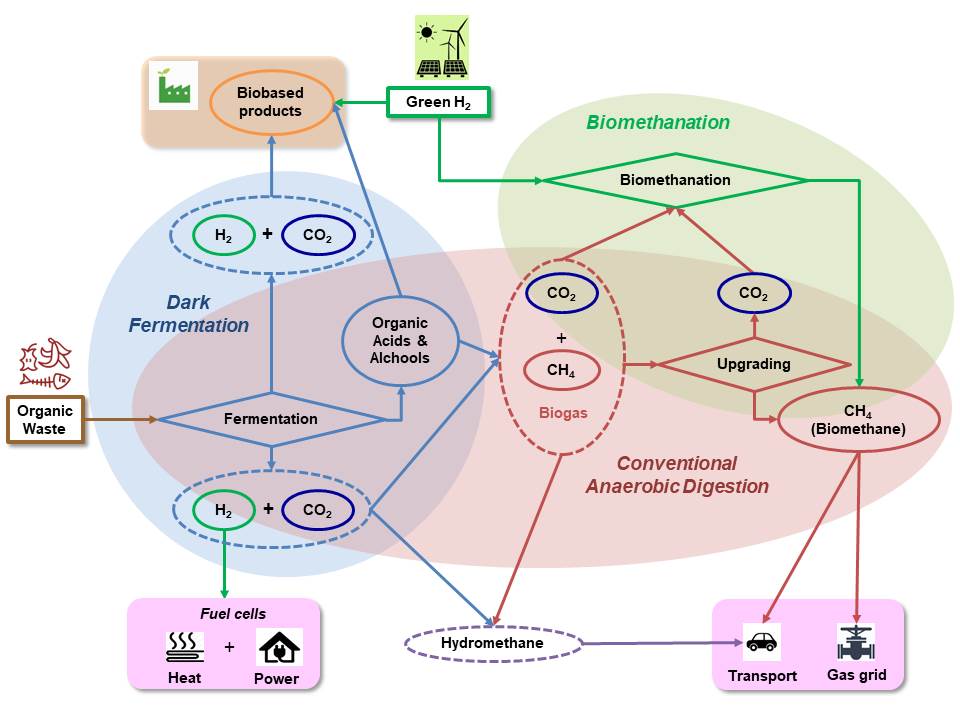 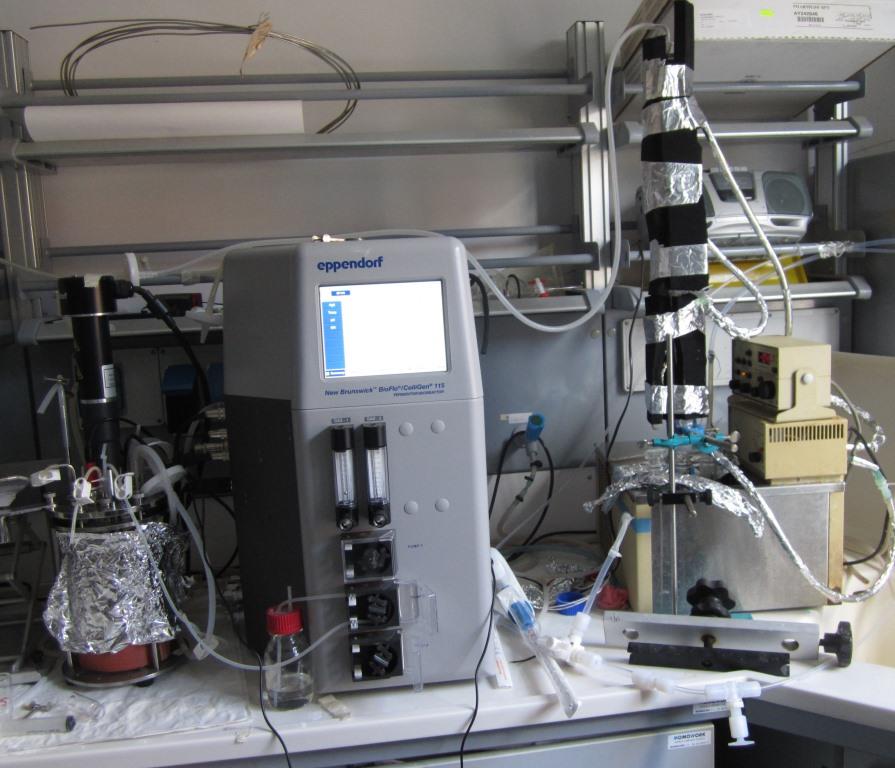 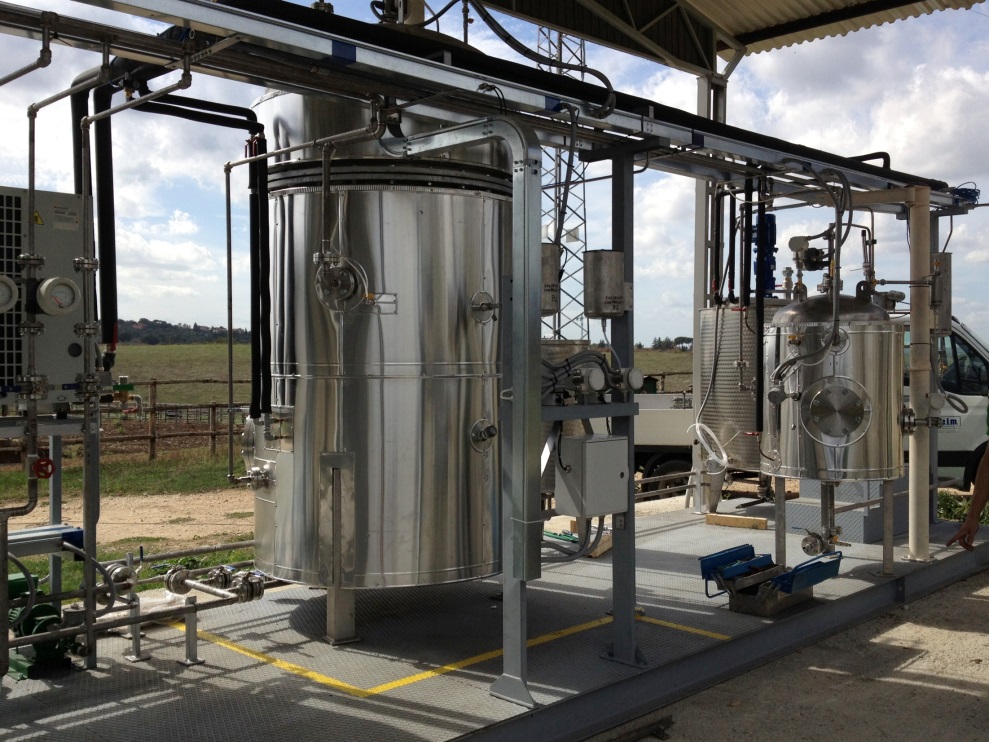 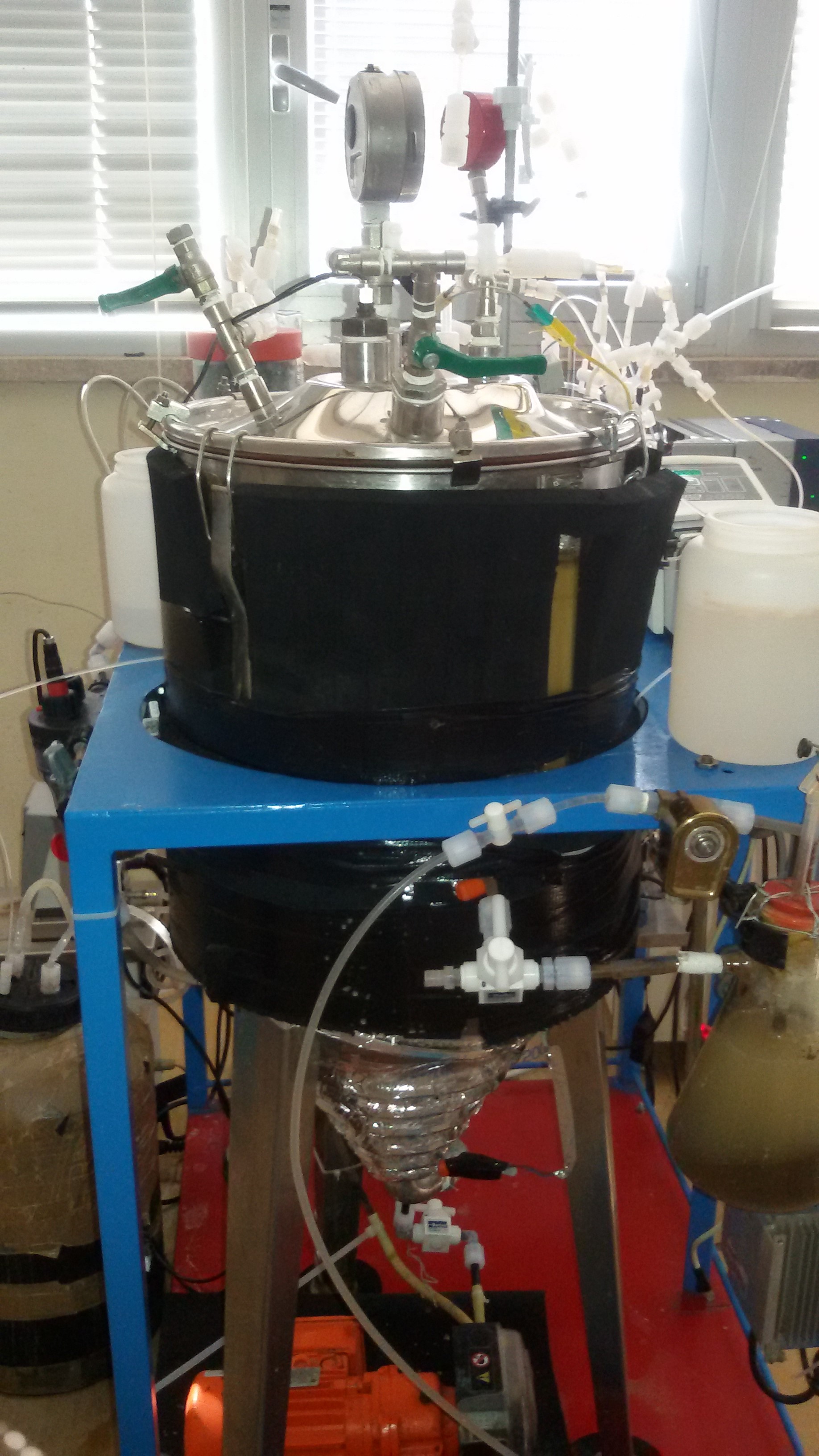