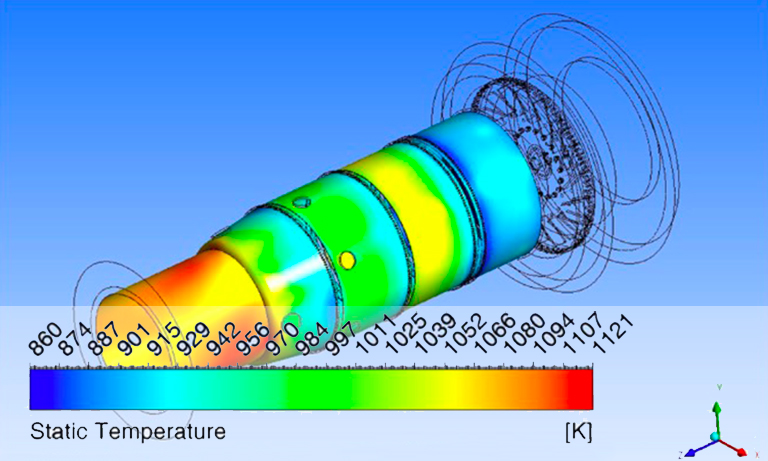 Hydrogen and the fuel-flexibility dilemma in gas turbines

The objective of this article is to clarify the state-of-the-art of gas turbines in terms of their fuel-flexibility, today intended as their capability to operate with hydrogen blends safely and reliably even with unplanned temporal composition fluctuations. From OEMs’s catalogues, DLE (Dry Low Emission) gas turbines can operate with natural gas/hydrogen mixtures up to 30% by volume of H2, on average: although this level corresponds just to 5% by mass with negligible reduction of CO2 (near 75% by volume of H2 is required to achieve a 50% CO2 reduction), it has to be considered as a challenging level in case of quick and unplanned hydrogen content fluctuations. Progress in fuel-flexibility is occurring fast but the journey towards fully-flexible “H2-turbines” (0-100% of H2) will still take some years and require some low TRL (2-3) activities too. The article reports the main problems to solve to reach the goal by 2030 in Europe and briefly describes ENEA’s activities on the topic. For example, ENEA’s IPSE Lab is developing and promoting activities on hydrogen gas turbines in some projects (Electric System Research, NextMGT), industrial collaborations (SNAM, BAKER HUGHES, ANSALDO ENERGIA) and international associations (European Turbine Network, Hydrogen Europe): focus is on the effects of adding H2 to natural gas in terms of flame topology (wrinkles, length), burning rate, thermo-acoustic instabilities, gas turbine operation

Nowadays, the term fuel-flexibility refers to gas turbine capability to operate with hydrogen blends as fuel in a stable, safe and reliable way when the H2 content unpredictably varies in time due to intermittent production from renewables. Such blends range from hydrogen-enriched natural gas (HENG) to ammonia (a promising H2-carrier).

Both producers and users already have a huge experience in feeding their gas turbines with syngas containing hydrogen from 30 to 60% by volume, a solid base to burn mixtures with higher H2 concentrations. Looking at OEMs’ catalogues, the stat-of-the-art exhibits, on average, DLE (Dry Low Emission) gas turbines able to burn H2 up to 30% by volume with low NOx emissions (<25 ppmv at 15% O2). Due to the higher flame temperatures with respect to naural gas, in some cases NOx emissions are controlled only by derating the machine, i.e., reducing its power [1]; besides, it must be said that the strongest NOx limitations for natural gas (<15 ppmv at 15% O2) are not always reached today1. Higher hydrogen content can be burnt by adopting the WLE (Wet Low Emission) technology, but with penalties in NOx emissions, reduced efficiency and life cycle, higher costs. Hence, most of investments are on DLE technology, i.e., lean premixed combustion without dilution (steam, nitrogen, water), also for retrofit solutions. New combustion concepts are also explored, such as the sequential combustion at constant pressure (implemented in the GT36) and that based on micro-mixing and exhaust gases recirculation (EGR).

An important aspect, easy to understand but very often neglected is that large hydrogen mass fractions are required in fuel mixtures to significantly affect CO2 emissions. Talking in terms of volume fractions is a common practice, but in a methane/hydrogen mixture the H2 volume percentage largely differs from its mass counterpart, as shown in Fig. 1; for example, 30 and 50% vol. correspond just to 5 and 11% mass, while 80% vol. is required to reduce CO2 emissions by 55%. However, even the low 30% vol. becomes really challenging if significative temporal fluctuations of composition are considered.

Hydrogen strongly alters combustion characteristics of a reacting mixture with respect to natural gas: the laminar flame speed increases, the ignition delay time decreases, the flammability limits enlarge, the adiabatic flame temperature increases, the turbulent flame speed becomes pressure dependent [2,3]. Such changes can dramatically affect combustion dynamics producing dangerous flashbacks [4] and/or thermos-acoustic instabilities [5,6] that may drive to unplanned overhauls thus reducing system reliability. Although both research and industrial sectors have been investigating the combustion instability topic for many years, it is still a not fully solved problem: strategies commonly adopted to avoid or limit the dangerous effects of such instabilities in modern gas turbines are based on empirical methods. Besides, the effects of hydrogen content on combustion dynamics make the Wobbe index unreliable for its applicability as fuel interchangeability index [7]. Special attention has to be given to control temperature peaks to limit NOx emission; maintaining them below 25 ppmv appears challenging for gas turbines operating in the range 0-100% H2 up to 2030: this is a difficult task due to the easily reached higher temperatures; there is an open discussion since the current limits for natural gas are lower, i.e., 15 ppmv. Another important effect of burning fuel mixtures with high H2 content is the higher steam content in the exhausts. This increases the heat exchange in the hot path of the gas turbine, thus requiring more cooling [8] and reducing component life cycle due to increased risk of hot corrosion. As a consequence, reducing the turbine inlet temperature, and consequently reducing the machine power with penalty losses of 2% points in efficiency (another challenging limit to maintain up to 2030), is a commonly adopted solution (see Fig. 2).

Adding H2 to natural gas also affects other operations of gas turbines, as at start-up and shut-down. Start-up procedures are commonly based on natural gas or liquid fuels, combining diffusive and premixed combustion at least up to FSNL2 state. At present, an average of 5% H2 by volume is tolerated at start-up.

Another term often used is “load-flexibility” or “operational flexibility”. This refers to gas turbine capability to change its power in small time to quickly stabilize the electric grid. Different solutions were proposed and implemented in the recent years, reaching today a power rate of 10% of nominal power per minute. Such a value seems to be fine for gas turbine users today and should be maintained in the future moving to hydrogen gas turbines.

With reference to micro-gas turbines, despite the efforts of some OEMs, they do not follow the learning curve of the heavy-duty ones at the same pace, having a very tiny hydrogen tolerance. However, being the micro-gas turbines users of the same gas grid of larger ones, more efforts on R&D are mandatory to reach the same hydrogen compliance. Looking at the gas turbine hydrogen tolerance on a broader perspective, nowadays and presumably at least up to 2030, the major issues will not be on the technology but on the hydrogen availability and cost. The current global production of hydrogen is around 70 Mt per year, 99% of them coming from coal and natural gas. If all current hydrogen production would be produced from water electrolysis, the amount of electrical energy required would be around 3600 TWh per year, more than the annual production of the whole European Union [10]. The availability issues will be much more challenging if the electricity for water electrolysis should come from the excess of VRES production: the amount of curtailed wind power generation in Germany on 2016 was 4722 GWh, while the energy requirement to produce hydrogen by electrolysis to run just one 9HA.02 gas turbine for 8000 hours at nominal power is 19600 GWh [11]. Even not introducing the costs issue, just from this perspective, in the authors’ opinion the use of blue hydrogen will be mandatory to build a realistic hydrogen value chain, as a precursor of a wide exploitation of green hydrogen when available in practical quantities for an effective CO2 emission abatement.

Numerical simulations with the in-house code HeaRT run on the HPC platform CRESCO6 are aimed at flame topology analysis [12]: simple configuration injections are investigated also in EGR conditions, i.e., including mixing of fresh reactants with some hot exhaust gases. Fundamental studies are also performed experimentally in simple combustion devices suitably designed for a better coupling with numerical investigations [13]; in particular, the attention is focused on thermo-acoustics by using laser diagnostics and specific real-time sensors developed by ENEA (ODC, to identify instability precursors and DOES, to measure composition).

More complex geometries, like the combustor (including injection plate, liner, dilution holes) of the micro-gas turbine of the AGATUR plant in ENEA, are simulated by using the ANSYS code to obtain helpful information for the operation of the related gas turbine. An example of the effects of hydrogen in this combustor is in [14]. Work is in progress to feed the micro-gas turbine TURBEC T100 of the AGATUR plant with hydrogen [15,16]: here, the aim is to understand how to operate the machine and explore its behaviour under different steady and fluctuating H2 contents.

Hydrogen is going to play a central role in decarbonizing different sectors. In the power sector, gas turbines are asked to operate as a back-up service (seasonal and peak) to sustain variable renewable energy sources and stabilize the electric grid (both in voltage and frequency): their contribution to the electric system flexibility is expected to be important even in a 2040 projection (see Fig. 4), with an estimate of annual operating hours less than 3000. In this scenario, post-combustion carbon capture technologies are not applicable both from the technical and economic point of view: the potential annual CO2 reduction due to 100% hydrogen gas turbines is larger than 450 Mt.

To complete the picture and specialize it to Italy, it is reminded that natural gas is the major source contributing to limit the greenhouse gases emission, with very quick positive effects at local level. Besides, in Italy the gas network is very spread and reliable, while gas turbines are critical to ensure the adequacy of the electric system in view of the coal phase-out in 2025.

The recent European roadmap on gas turbines, developed within the Clean Hydrogen Energy association to be transferred into the “Strategic Research and Innovation Agenda” (SRIA 2020), has identified some goals that require also low TRL activities:

Although the long history of gas turbines and their application in different sectors, the article stressed that some research and developments are required for their reliable and safe operation with increasing hydrogen content, to reach at least 80% by volume for a significant CO2 reduction. However, behind the technological effort required, the widespread diffusion and availability of H2 is the real barrier, mainly linked to its production cost. Once accepted hydrogen as part of the solution to the climate change, transition to the “hydrogen society” can only happen starting to build the whole infrastructure and, in the authors’ opinion, by using the cheap “blue hydrogen” in the short term, and the still expensive “green hydrogen” in the long term. 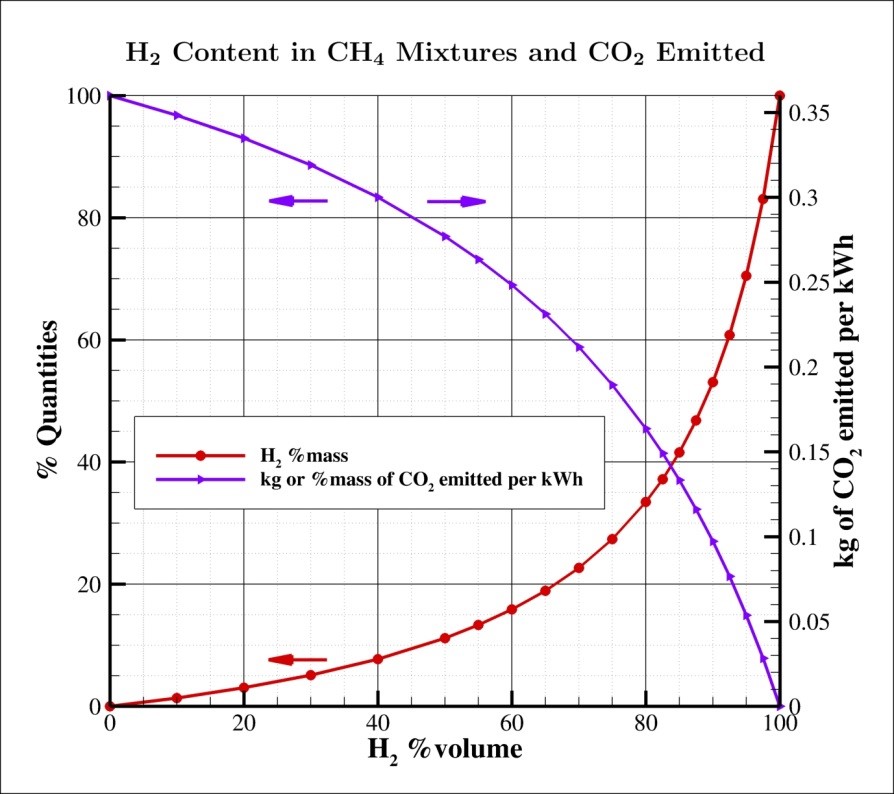 +
Fig. 1. Relation between volume and mass percentages in methane/hydrogen mixtures, and impact in terms of CO2 emitted (assuming an electrical efficiency of 55%). The percentage quantities on the left are with respect to pure methane. 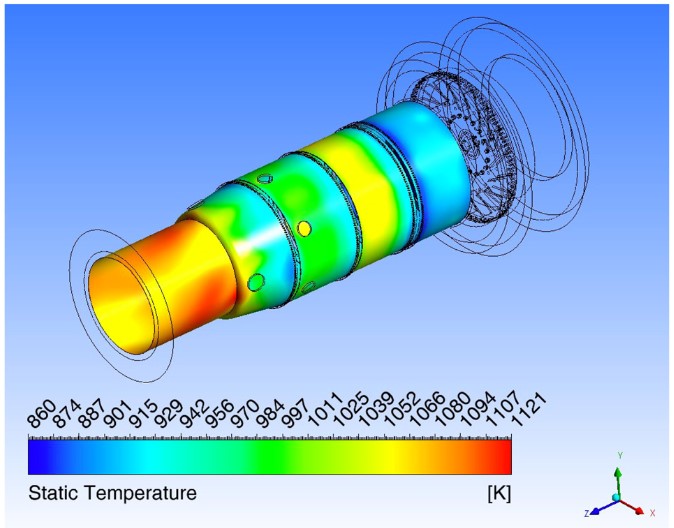 +
Fig. 3. Temperature distribution on the liner inner walls of a micro-gas turbine combustor fed with methane and syngas [14].