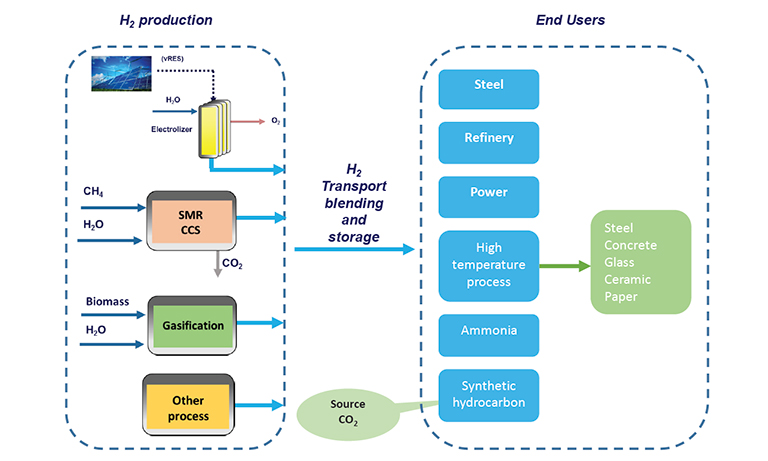 The objective of this article is to clarify the state-of-the-art of gas turbines in terms of their fuel-flexibility, today intended as their capability to operate with hydrogen blends safely and reliably even with unplanned temporal composition fluctuations. From OEMs’s catalogues, DLE (Dry Low Emission) gas turbines can operate with natural gas/hydrogen mixtures up to 30% by volume of H2, on average: although this level corresponds just to 5% by mass with negligible reduction of CO2 (near 75% by volume of H2 is required to achieve a 50% CO2 reduction), it has to be considered as a challenging level in case of quick and unplanned hydrogen content fluctuations. Progress in fuel-flexibility is occurring fast but the journey towards fully-flexible “H2-turbines” (0-100% of H2) will still take some years and require some low TRL (2-3) activities too. The article reports the main problems to solve to reach the goal by 2030 in Europe and briefly describes ENEA’s activities on the topic. For example, ENEA’s IPSE Lab is developing and promoting activities on hydrogen gas turbines in some projects (Electric System Research, NextMGT), industrial collaborations (SNAM, BAKER HUGHES, ANSALDO ENERGIA) and international associations (European Turbine Network, Hydrogen Europe): focus is on the effects of adding H2 to natural gas in terms of flame topology (wrinkles, length), burning rate, thermo-acoustic instabilities, gas turbine operation

Implementation of hydrogen offers a solution to decarbonise industrial processes where reducing carbon emissions is both urgent and hard to achieve. A large share of the CO2 emissions in Italy comes from the industry [1]. At 2017 45 % of the Italian greenhouse gas emission was allocated in hard to abate sector. Switching to alternative energy and feedstock entails a high GHG abatement potential. Many of the industrial processes where natural gas or other fossil sources are used as feedstock would be replaced with renewable (green hydrogen), low-carbon hydrogen (blue hydrogen) and other green process.

An immediate application in industry is to reduce and replace the use of carbon-intensive hydrogen in refineries, in the production of ammonia, of other chemical products and new forms of methanol, or to partially replace fossil fuels in iron and steel making processes. Currently in most industrial applications, hydrogen is provided by grey hydrogen production from conventional energy source that takes place on-site using natural gas reformers or coal/biomass gasifiers and feeds directly into chemical and industrial processes.

In industrial sector, in addition to the production of chemicals, petroleum refining and to the primary steel industry, hydrogen can potentially also be used for the industrial heating, especially for processes ”hard to abate” that require to provide high temperature (for example industry of steel, concrete, glass, ceramic, paper) and where direct electrification may not be the most effective or feasible alternative, as reported in the European SPIRE 2050 Roadmap.

Development of hydrogen production and use in industry includes R&D projects, research infrastructures, pilot plants, first industrial deployment and integration of new technologies in existing industrial processes. Industrially relevant examples for the use of hydrogen replacing fossil feedstock are the production of low carbon steel by replacing coke coal with hydrogen and the use of renewable hydrogen or blue hydrogen in refineries.

Key technical challenges and R&D can be summarized as follow [2] :

In the short term in the transition phase, blue hydrogen, using CCS to make SMR-based hydrogen processes carbon neutral, could help significantly reduce industrial emissions in a timely and cost-efficient way and can prepare the ground for a wider hydrogen economy.

A revision of ETS market could create positive business cases. Cost development and competitiveness in case of use hydrogen to provide heat and power for industry and the grid is driven mainly from the CO2 cost (e.g. ETS market) and by low hydrogen production costs.

Growing hydrogen demand in major industries offers the opportunity to create hubs that bring down the cost of low-carbon hydrogen pathways and kick-start new sources of demand. Consequently, it's essential make industrial clusters the nerve centres for scaling up the use of hydrogen. It will be therefore necessary to fund large scale demonstration projects.

In industrial hydrogen production processes such as coal gasification, methane steam reforming, water gas shift (WGS) reaction and biomass gasification, the emissions of CO2 can be reduced by CO2 capture. The goal of our research activity is to develop combined sorbent-catalyst materials (CSCM) for Sorption Enhanced Reforming (SE-SR) process. By combining processes (1)–(3) it is seen that the strongly endothermic steam reforming is thermally neutralized by carbonation reaction obtaining Eq.(4), therefore SE-SMR will be considered an energy efficient process. The CO2 produced in SR(steam reforming) and WGS (water gas shift) is chemically fixed on site upon a high temperature sorbent, so that CO2 emission is suppressed and thermodynamic equilibrium reactions are potentially brought to completion according to the Le Chatelier's principle producing high-purity H2. 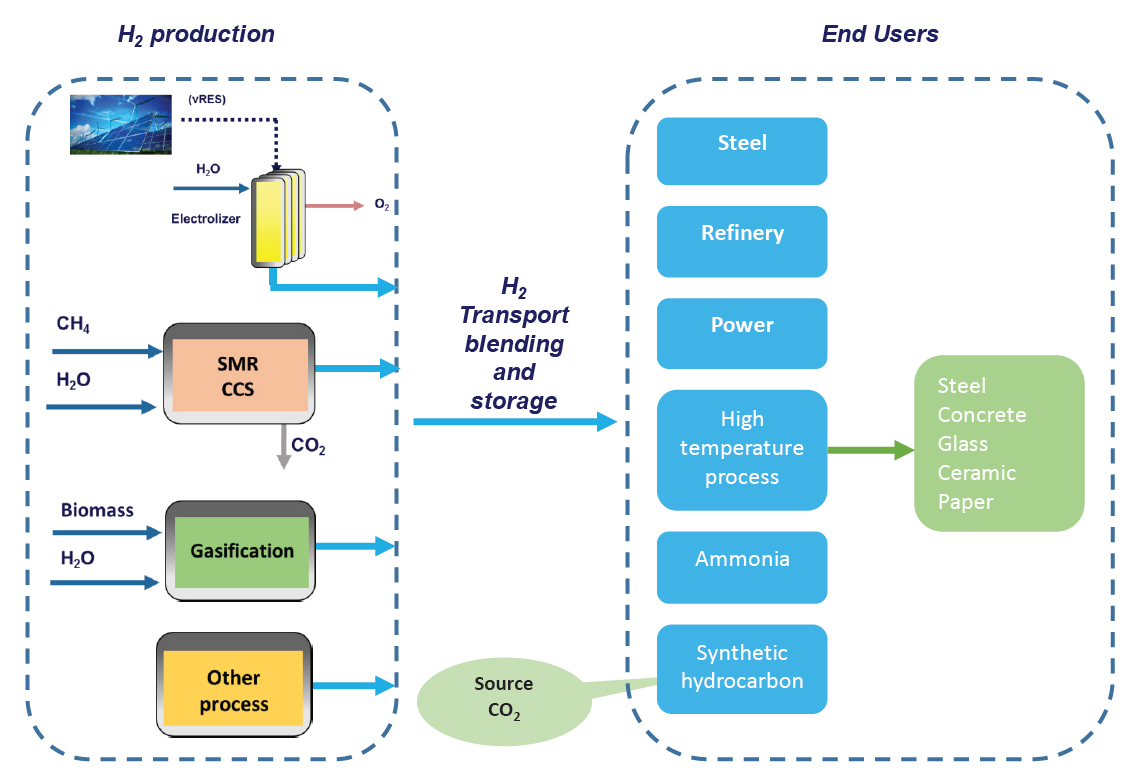 The best-known sorbent suitable for SE-SR process is CaO coming from naturally occurring minerals (limestone, dolomite) due to its low-cost, abundance, and non-toxicity. However, when the sorbent is subjected to repeated thermal cycles a sharply decline of reactivity of CaO lime versus CO2 arises as a result of sintering of CaO particles that engenders severe damaging of pore structure. For this reason, in the last decade intense research activities have been devoted on to development of synthetic CaO-based sorbents owing to their high reactivity versus CO2, fast carbonation/decarbonation kinetics, good cyclic stability, and relatively low cost of production [4]. Currently, the CaO-Ca12Al14O33 system is the most studied among different synthetic sorbent materials that can be applied in various CO2 sorption capture technologies.

The integration of both sorbent and catalyst in a single particle offers some advantages such as the lowering of the mass transfer resistance, the reduction of reactor volume, and the simplification of the system. In this context, the development of bifunctional materials with core/shell structure where a hollow shell is made of catalyst with sorbent nanoparticles in the interior is becoming a central topic in the field of reforming intensification process. In our work a combined CaO-Ca12Al14O33-Ni sorbent-catalyst material with improved CO2 capture stability and catalytic activity to be used in SE-SR of methane process has been successfully prepared by a novel synthesis method based on a multi-step approach. According to this method a mixed calcium-aluminium oxide ceramic was at first prepared by wet mixing/sintering method and subsequently used both as spacer for CaO sorbent and as support for Ni catalyst. Finally, the synthesized CaO-Ca12Al14O33-Ni has been tested over ten consecutive reforming (600°C)/regeneration (750°C) cycles. The good performance of SE-SR of methane over ten consecutive reforming (600°C)/regeneration (750°C) cycles at H2O:CH4=3:1M ratio using CSCM pellet has allowed to produce a H2-rich (> 90%) gaseous stream with low concentrations of CO2 and CO.

Presently in ENEA there is a multidisciplinary technological know-how with skills that cover aspect of R&D on hydrogen utilization in industry. ENEA is in charge of a 0.5 MWth pilot plant ZECOMIX (Zero Emissions of Carbon with MIXed technologies) whose key objective is the production of H2 water-gas shift or steam methane reforming process with simultaneous CO2 capture. A syngas can be produced in the ZECOMIX plant which is similar in composition to the off-gas leaving a blast furnace for iron and steel making process. This feature of ZECOMIX permits to demonstrate at TRL 7 the decarbonisation of off-gases produced in iron and steel mill via an environmental-friendly calcium based solid sorbent.

From 2018, this plant has been selected as a European Carbon Dioxide Capture and Storage Laboratory Infrastructure (ECCSEL). Being a member of ECCSEL consortium is a label of quality: it has been evaluated through a European process based on commonly agreed criteria and recognised as being of the highest standards and relevance to research and industry in Europe. By means of the ECCSEL consortium, ZECOMIX is connected to a wider user group composed of the research and industrial communities as well as public services.

ENEA is a member of the H2020 GICO (Gasification Integrated with Carbon capture and cOnversion) project coordinating by the University Gugliemo Marconi. In this project ENEA is the work-package leader of an innovative process for H2 production from biomass gasification with simultaneous CO2 uptake by CaO sorbent. The exhausted solid sorbents can be reused in several industrial processes (e.g. cement and bricks production, agglomerates) reducing the industrial wastes and making the H2 production from biomass a more profitable option.

ENEA is coordinating also project on Systems for Flexible Energy via reuse of carbon (SFERO) within the Research Line “1.6 Efficienza energetica dei prodotti e dei processi industriali” of the Italian research programme 2019-2021: “Ricerca di Sistema” funded by the Italian Ministry of Sustainable Economic Development. The main objective of SFERO is the development of an efficient process for H2 production from reforming of methane integrated with CO2 chemisorption. The captured CO2 will be reused in plasma reactor for renewable fuels production.

ENEA is participating as facility owner in the H2020 ECCSELRATE project coordinating by NTNU. The main target of this project is to develop marketing, access and services models for industry and SMEs in the field of carbon ca pture. ENEA will share the ZECOMIX plant for the demonstration of H2 production from methane and syngas via carbon capture processes.

Future development projects may involve activities on laboratory scale and on prototype and pilot plant scale covering different TRL value (i.e. synthesis and test catalyst for SMR process, test on burners operated in hydrogen rich environments, improvements in catalytic reactions and chemical processes, use of renewable carbon feedstock, use of oxygen from electrolysis, dynamic operation capability etc.). In this contest, process and predictive analyses, technical economic and environmental feasibility studies will be carried out.

Industry implementation of hydrogen is one of the ways to decarbonise the industry sector especially “hard to abate” sector and can acts as catalyst for hydrogen economy deployment. Approximately 16 TWh/year of hydrogen is currently (2020) used in Italy in a wide range of industrial processes (mainly refining and chemical use) [3]. Moreover, hydrogen can replace fossil fuels as a feedstock in other industrial process (as a reducing agent in the steel manufacturing process) and can be used to produce liquid fuels, synthetic natural gas and important petrochemicals and also as an energy source for heat and power generation. In order to achieve this transformation, large quantities of hydrogen at competitive conditions as well as appropriate conversion technologies and process adaptions are needed. R&D actions can foresee demonstration projects proving hydrogen integration across key industrial processes and heat and power generation.