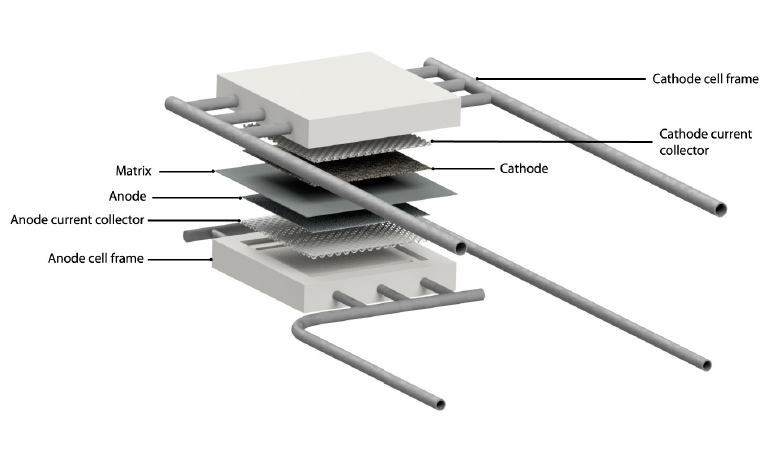 To achieve long-term climate neutrality targets by 2050 as imposed by the EU [1], transition technologies capable of efficiently exploiting unavoidable CO2 streams, in synergy with renewable energy sources, must be further investigated and deployed in the global energy sector; in such a context, hydrogen is an energy vector that can effectively contribute to the energy transition due to its wide applicability, both in terms of sector and scale [2]. In this scenario, electrochemical systems can connect gas and electricity networks, providing the opportunity to integrate clean technologies into industrial processes and to reduce their environmental impacts. Among them, high-temperature fuel cells using molten carbonate electrolysers represent a promising technology to valorise CO2-rich waste streams, which are typically available in industrial plants, by their conversion into high-value hydrogen or H2/CO syngas. ENEA is among the first organizations worldwide having started a deep and comprehensive investigation of the MCEC technology. Thanks also to the pioneristic activities carried out in ENEA laboratories, the interest on MCECs technology is growing fast, involving industrial partners as end users and technology uptakers but also research institutions at Italian and European level. What is expected to obtain in the next future is to build a supply chain able to take out from the laboratories the technology to apply it in relevant industrial context.

Architecture and engineering of molten carbonate electrolysis cells (MCECs) are based on the well-proven and mature Molten Carbonate Fuel Cell (MCFC) technology, which started to operate commercially from 2007 for applications in the prime and premium power generation market of large stationary systems [3]. The typical power size of MCFCs ranges from several hundred kilowatts up to 3-4 MW, with several power plants with a capacity of 10-60 MW already installed worldwide [4]. The difference between MCEC and MCFC is the direction of the redox reaction only [5]. Figure 1 schematizes the reactions occurring inside a MCEC (a) and a MCFC (b), respectively.

Water, carbon dioxide and electricity are required in electrolysis mode to perform the reduction reaction in the fuel electrode (FE), where H2 and carbonate ions (CO32-) are produced, as expressed by Eq. (1):

H2 O+CO2+2e--→H2+CO3-2 Carbonate ions are transported through the electrolyte to be oxidized at the oxygen electrode (OE), producing carbon dioxide and oxygen, as reported by Eq. (2):

Molten Carbonate Electrolysis Cells based on the flat design of MCFC cells typically operate in the range 600-650°C. No flow is strictly required at the OE inlet; nevertheless, since CO2 is a highly corrosive gas, feeding a gas stream, generally air mixed with a little amount of carbon dioxide, is beneficial to sweep out the formed gases, thus avoiding unrestricted degradation of the electrode.

As shown by Eq. (3), the overall process carried out in MCECs is the electrochemical water splitting of water with simultaneous CO2 transfer (without net generation) from the FE to the OE. Therefore, if the system is fed with renewable power and CO2 is separated from the OE outlet stream and recycled to the FE feed, MCEC electrolysis can be used as a green hydrogen production method, with some advantages compared to more consolidated processes: MCECs require a lower power input to produce 1 Nm3 of hydrogen (3.5kWh/Nm3) than low-temperature water electrolysers, because they can be operated with lower cell potentials (~1,2 V vs 1,6-1,8 V); furthermore, compared to solid oxide steam electrolysers, MCECs operate at significantly lower temperatures (600-650 °C vs >700 °C).

Equation (3) also shows that MCECs are characterized by the unique ability to act as an integrated CO2 separator during their operation. Therefore, MCECs can be used to separate a part of the CO2 from the off-gas and concentrate it at the OE, making it is easy to capture as pure CO2, for instance, after using the electrochemically produced CO2-O2 gas mixture (see reaction (2)) in an oxy-combustion process.

Similarly, MCEC can be used to exploit CO2-rich waste streams typically available in industrial environments, by converting them at the Fuel Electrode compartment into high-value syngas products, which can be reused in the industrial plant or elsewhere for different applications, like producing synthetic fuels or chemicals such as methanol.

The research on MCEC is still lying at fundamental levels, with almost no studies on scaled up systems. The main challenge for the implementation of the MCFC technology for electrolysis applications is the identification of structural and functional materials with sufficient corrosion resistance when exposed to the higher potentials and CO2-rich electrolysis atmospheres.

As mentioned above, the research in the field of MCEC is still at an earlier stage compared to other types of electrolysers, although this technology represents an attractive sustainable option for generating green hydrogen or synthetic fuels from CO2-rich waste streams. Several issues need to be tackled to implement a reliable MCEC technology, starting with a better understanding of the degradation phenomena affecting cell materials, in order to improve the cell tolerance and stability to the harsh operating conditions. Furthermore, the development of reversible MCECs, i.e. systems that can work efficiently in both electrolysis and fuel cell operation modes, is another important target. ENEA is among the first organizations worldwide having started a deep and comprehensive investigation of the MCEC technology, with two main research lines:

For both research lines, ENEA is also studying the integration of MCEC systems with concentrating solar power (CSP) plants, which may feed the process with renewable heat and power, for a fully green hydrogen production [15]

Production of pure hydrogen with MCEC cells is not an easy task since the steam electrolysis is challenged by side reactions such as CO2 electrolysis and the reverse water gas shift reaction (RWGSR), the latter one consuming the hydrogen produced at the Fuel Electrode forming carbon monoxide according to Eq. (4):

Equilibrium conditions are rapidly established at 600-650°C in presence of the Fuel Electrode of nickel, which is a highly effective RWGSR catalyst. Furthermore, carbon monoxide may be also produced by direct CO2 reduction in molten carbonate salts, although CO2 electrolysis is slightly more energy demanding than steam electrolysis [6]. As this energy gap decreases with temperature and becomes negligible above 600°C, this gives the opportunity of producing pure hydrogen in molten carbonates by lowering the temperature below 600°C and conducting the electrolysis under well controlled potential and current conditions. Based on these concepts, the development of an innovative molten carbonate steam electrolysis system working efficiently at around 500°C, is under scrutiny at ENEA. This activity builds on previous studies [7] and on the consideration that lower operating temperatures may be beneficial for the process manageability, safety and economics. The development of more efficient electrolysis cell designs compatible with intermittent and dynamic uses as those present in hydrogen energy storage systems (Power-to-Gas systems) is also under attention. For instance, molten carbonate cells with a tubular cell design has been recently investigated [8]. Results indicate that rapid start-up and improved mechanical stability can be achieved with tubular MCC systems, which would be highly relevant for implementing a molten carbonate electrochemical technology to be used in Power-to-Gas systems. Development of stable anode materials for replacing traditional MCFC nickel anodes, which exhibit substantial corrosion at around 500°C, is the primary objective of current experimental efforts [9].

The possibility of using MCFC in reverse mode to produce hydrogen instead of electric power has been deeply investigated in ENEA laboratories. The main goal of the experimentation carried out was to evaluate the electrochemical performance of MCFC/MCEC device. To tackle this challenging objective, ENEA team assembled and tested an MCC single repeating unit (fig. 2) of relevant size (81 cm2), to move one step forward the state of the art (previously similar tests have been carried out only on 3 cm2 cells). Experimentation carried out in ENEA facilities consisted of an accurate an extensive matrix of tests performed by varying all the operating conditions one by one, while diagnosing the state of health of the device continuously. The results of the experimental campaign shed light on the real feasibility of using MCFC/MCEC systems, increasing the know-how on a technology that can represent the missing ring between the capture and utilisation of CO2, thus closing the carbon loop.

Next steps in this R&D field in ENEA will be to bring together the two above-mentioned research lines, joining results and know how to overcome the major issues identified and develop the next generation MCEC systems.

The possibility of enabling low-carbon and sustainable manufacturing technologies for the production of high-value chemicals (i.e., carbon nanotubes) [10] and key commodities (i.e., iron, cement) [11,12] via molten carbonate electrolysis is at the basis of recent studies [13,14], which also take into consideration the possibility of an easy integration of MCEC technologies with CSP systems, aiming to increase the overall efficiency and sustainability of the production processes.

Chemical energy storage of intermittent renewable energy sources via hydrogen or syngas production is another field with significant opportunities for MCEC processes. Energy storage applications is the main subject of interest and research studies in ENEA laboratories, on MCEC processes.

In particular, ENEA interest is directed to the development of MCE processes for hydrogen production from steam in CO2/H2O gas mixtures (wet CO2) aiming to valorise carbon dioxide exhaust streams usually produced in industrial environments (e.g. refining processes, biogas upgrading) closing, in this way, the carbon cycle by producing renewable fuels. These application scenarios are particularly attractive since MCECs are able, on one hand, to capture CO2, when operated in fuel cell mode, in an effective way (capture efficiency > 90%) and, on the other hand, to utilise it, operating in electrolysis mode for efficiently producing syngas (conversion rate <3.5 kWh/Nm3) compared to the state of the art.

ENEA’s activities in this field are currently carried out within the implementation plan 2019-2021 of the Italian Electric System Research programme, funded by the Italian Ministry of Economic Development. The main goal is taking the technology from TRL 3 to 4. In parallel, a strong network composed by research entities, SMEs and industries is taking form both at Italian level and European one, where ENEA plays an important role as know how collector and EU proposals coordinator.

Molten carbonate steam electrolysis is a promising and versatile process that can be used to produce green hydrogen or as a carbon utilization system to obtain synthetic fuels (gas, liquid) or chemicals (e.g. methanol).

Thanks also to the pioneristic activities carried out in ENEA laboratories, the interest on MCECs technology is growing fast, involving industrial partners as end users and technology uptakers but also research institutions at Italian and European level. What is expected to obtain in the next future is to build a supply chain able to take out from the laboratories the technology to apply it in relevant industrial context.