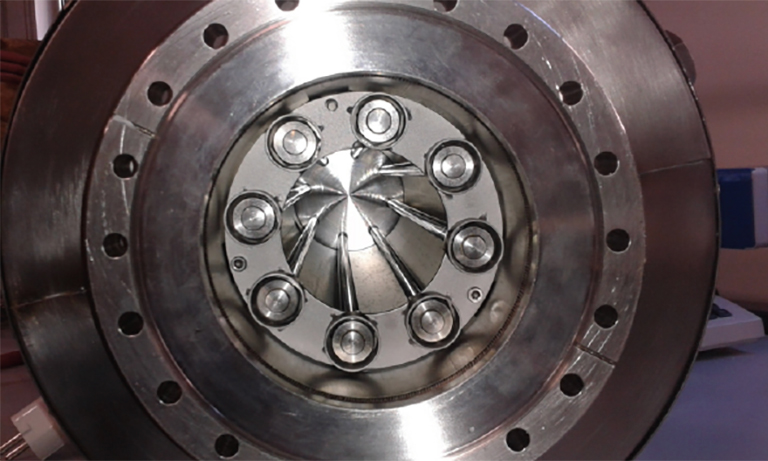 Separation technologies based on membranes can be applied in continuous processes and are characterized by system design flexibility (easy scaling-up and hybridization with conventional processes), capability to produce high-quality products and saving energy. Membranes consisting of thin-walled Pd-Ag tubes have been developed by ENEA for recovering hydrogen isotopes in the fusion fuel cycle (hydrogen and tritium separation from He, water detritiation) and for producing ultra pure hydrogen via reforming and other dehydrogenation reactions in green chemistry applications.

Separation technologies based on membranes can be applied in continuous processes and are characterized by system design flexibility (easy scaling-up and hybridization with conventional processes), capability to produce high-quality products and saving energy. In this vein, the features of the membrane technologies result to be fully sound with the requirements of the green chemistry processes. Membranes consisting of thin-walled Pd-Ag tubes have been developed by the ENEA Frascati laboratories for recovering hydrogen isotopes in the fusion fuel cycle (hydrogen and tritium separation from He, water detritiation).

Pd-membrane reactors resulting from the combination of membrane tubes with a catalyst bed can exhibit high reaction conversions thanks to the continuous removal of the hydrogen, one of the reaction products. Based on their capability to separate hydrogen from gas mixtures with an infinite selectivity, these Pd-based tubes, developed in the framework of the fusion fuel cycle activities, have then been applied for producing at lab-scale ultra-pure hydrogen (e.g. suitable for feeding polymeric fuel cell) through dehydrogenation reactions.

The Department for Fusion and Technologies for the Nuclear Safety conducts at Frascati laboratories the R&D activities on fusion energy, mainly supported by the European program (European Fusion Development Agreement, 1999-2013, and Consortium EUROfusion, 2014-present).

One of the main activity carried out at ENEA Frascati laboratories has concerned the development of separation units dedicated to the extraction and purification of the hydrogen isotopes. Such processes are a part of the fusion fuel cycle aimed at providing the deuterium and tritium needed to sustain the fusion reaction [1, 2]. The research activities were focused on the design, construction and characterization of thin-walled Pd-tubes that exhibit the capability of separating with infinite selectivity hydrogen and its isotopes from gas mixtures [3, 4]. The Pd-tubes were used both as permeators and as membrane reactors for recovering tritium via gas permeation, water gas shift and isotopic exchange reactions [5, 6]. As an example, Fig. 1 shows a Pd-membrane reactor studied for the recovering of tritium from tritiated water via isotopic exchange.

An innovative Pd-membrane reactor and a process have been developed with the CEA (Commissariat a l’energie atomique et aux énergies alternatives) for the recovery of tritium from tritiated waste of the JET (Joint European Torus in operation at Culham, UK) [7-9]. Following this collaboration, Pd-membrane reactors designed for detritiation processes have been produced by ENEA laboratories and delivered to CEA in the frame of commercial agreements: Fig. 2 reports the internal view of a membrane reactor consisting of 8 Pd-tubes. In a recent study, an innovative application of porous membranes (acting as a membrane gas-liquid contactor) was proposed for the extraction of tritium from liquid breeder of fusion reactors [10, 11].

Further studies carried out in strict collaboration between Frascati and Casaccia research centers demonstrated that the Pd-membranes developed for the fusion fuel cycle exhibit the capability to produce ultra-pure hydrogen via dehydrogenation of hydrocarbons, alcohols and biomass. In principle, a Pd-membrane reactor, a combination of a Pd-membrane with a catalyst, is capable to perform dehydrogenation reactions with very high conversions [4]. In fact, the continuous removal of one of the products (i.e. the hydrogen) promotes the reaction conversion according to the well-known “shift effect” of the membrane. Main applications have concerned the production of hydrogen via reforming of methane, ethanol and biomass. Fig.3 shows the scheme and the picture of a membrane reactor made of thin-walled Pd-tubes for producing pure hydrogen via ethanol reforming. In particular, from the reforming of olive mill wastewater (OMW), a by-product of the olive oil industry with significant pollution effect in the Countries of the Mediterranean regions, it is possible to produce hydrogen and syngas [11-13]. OMW reacts over a catalyst bed inside Pd-tubes while the hydrogen produced is extracted through the membrane: some kg of hydrogen can be produced per ton of OMW while the content of organic compounds in the retentate of the membrane reactor is reduced by more than 90%.

The reforming of methane with OMW has been studied through a reforming unit consisting of multi-tube membrane reactors and capable to produce up to 1 m3/h of hydrogen [13]. In the frame of the project Microgen30 (call Industria2015), the high-grade hydrogen produced by these membrane units has been thought to feed polymeric fuel cells of cogeneration systems where electricity and heat were produced from methane with high efficiency.

Another application shows the use of Pd-based tubes, that exhibit complete selectivity to hydrogen, in small scale applications for purifying the hydrogen produced by the alkaline electrolysers. A study dedicated to these applications has developed an alkaline electrolyser where the cathode consisted of a Pd-membrane tube as shown in Fig. 4 [14, 15]. In this device, about 50% of the hydrogen produced by electrolysis is directly extracted through the membrane tube as ultra-pure hydrogen without any need of further purification.

Other studies considered the hydrogasification of biomass to produce methane enriched streams [16]. The hydrogasification of refuse derived fuel (RDF) is a waste-to-fuel process characterized by negligible toxic emissions (e.g. dioxins and furans) typical of the other thermal processes used for the treatment of this biomass (e.g. incineration, gasification, etc.) [17, 18]. The operation with excess of hydrogen allows to achieve high methane yields and practically zero emissions of dioxins as reported in Fig. 5 related to the case of a hydrogasification reactor fed with 1000 kg h-1 of dry RDF and a hydrogen excess of about 40 kg h-1.

A recent analysis was addressed to the use of an innovative reactor for the direct thermal splitting of water. This membrane reactor consists of two distinct membranes for the extraction of the hydrogen and the oxygen respectively as schematically reported in Fig.6 [19, 20]. This study has shown that the presence of a couple of membranes amplifies the “shift effect” typical of a membrane reactor thus allowing the reduction of the process temperature. In a case study considering a membrane reactor made of Ta membrane tubes of wall thickness 0.15 mm and a chamber perm-selective to oxygen made of hafnia of thickness 0.1 mm, reaction conversions of 20% are obtained by this membrane unit at around 2000 °C, much below the temperature of 2700 °C needed to a traditional reactor for attaining the same performances. At 2000 °C, about 200 and 100 Nm3/h of pure hydrogen and pure oxygen are respectively produced by feeding 1000 kg h-1 of water and assuming a membrane permeation efficiency of 0.9. The reaction conversion of about 10% is achieved by this membrane reactor at 1800 °C, a temperature that could make feasible the exploitation of solar energy for the direct production of hydrogen and oxygen from water.

Presently, the high cost of the precious metal used for manufacturing the thin-walled Pd-tubes is consistent with their applications in the fusion fuel cycle. Outside fusion technologies, these Pd-membrane units have found only niche applications where high hydrogen purity is required. Typical examples are laboratory alkaline electrolysers where the hydrogen purification can be efficiently performed by Pd-membranes. The perspective of using these metal membranes on large scale devices is based on the development of less expensive metal alloys instead of the Pd-based ones [21]. In this vein, the studies on binary and ternary alloys based on refractory metals are expected to demonstrate the viable and economic applicability of dense metal membranes for producing pure hydrogen via reforming of biomass. In fact, as verified with the Pd-membranes, this kind of membrane reactors could operate in continuous processes by exhibiting high reaction conversions as required by the future processes of the “hydrogen chain”.

Main technological transfer actions are expected within the sectors of the treatment of the OMW and the RDF hydrogasification. ENEA is discussing collaborations with Italian enterprises of these sectors with the aim to complete the industrialization of the processes studied through the realization and optimization of prototypical installations.

The R&D activities on the Pd-membranes in the fusion fuel cycle are mostly carried out in the frame of the EUROfusion program that is funding the European research on fusion energy. The Frascati laboratories plays a prominent role for the realization of membrane processes to extract hydrogen isotopes from He (used both as coolant and purge gas in breeding blankets) and from tritiated water. Main collaborations are with the partners of the EUROfusion Consortium, in particular the laboratories of the Karlsruhe Institute of Technology (DE) and the CEA-Cadarache Center (FR). The use of Pd-membranes for recovering tritium from gaseous streams are currently proposed also inside the project TRANSAT aimed to select cross-cutting technologies for tritium processing in fusion and fission reactors.

The collaboration between the departments FSN and TERIN has allowed the development of a sound know-how around Pd-based membranes and membrane processes for the separation of hydrogen and its isotopes. Several characteristics of the membrane processes (continuous operation, modularity, reduction of sizes, capability to work with high reaction conversion and then high energy efficiency) are the pivotal requirements for the fusion fuel cycle applications since they have to operate safely and with low tritium inventory. The challenge is to develop metal alloys cheaper than those Pd-based, with the aim to candidate the separation technologies based on metal membranes for supporting the penetration of the hydrogen as an efficient and safe energy vector in the future sustainable energy scenarios. Processes for producing hydrogen from renewable sources (e.g. reforming of biomass, solar-assisted water splitting) or exploiting the renewable hydrogen to produce green fuels (e.g. hydrogasification of RDF) could be applications where to demonstrate the results of R&D activities on metal membranes 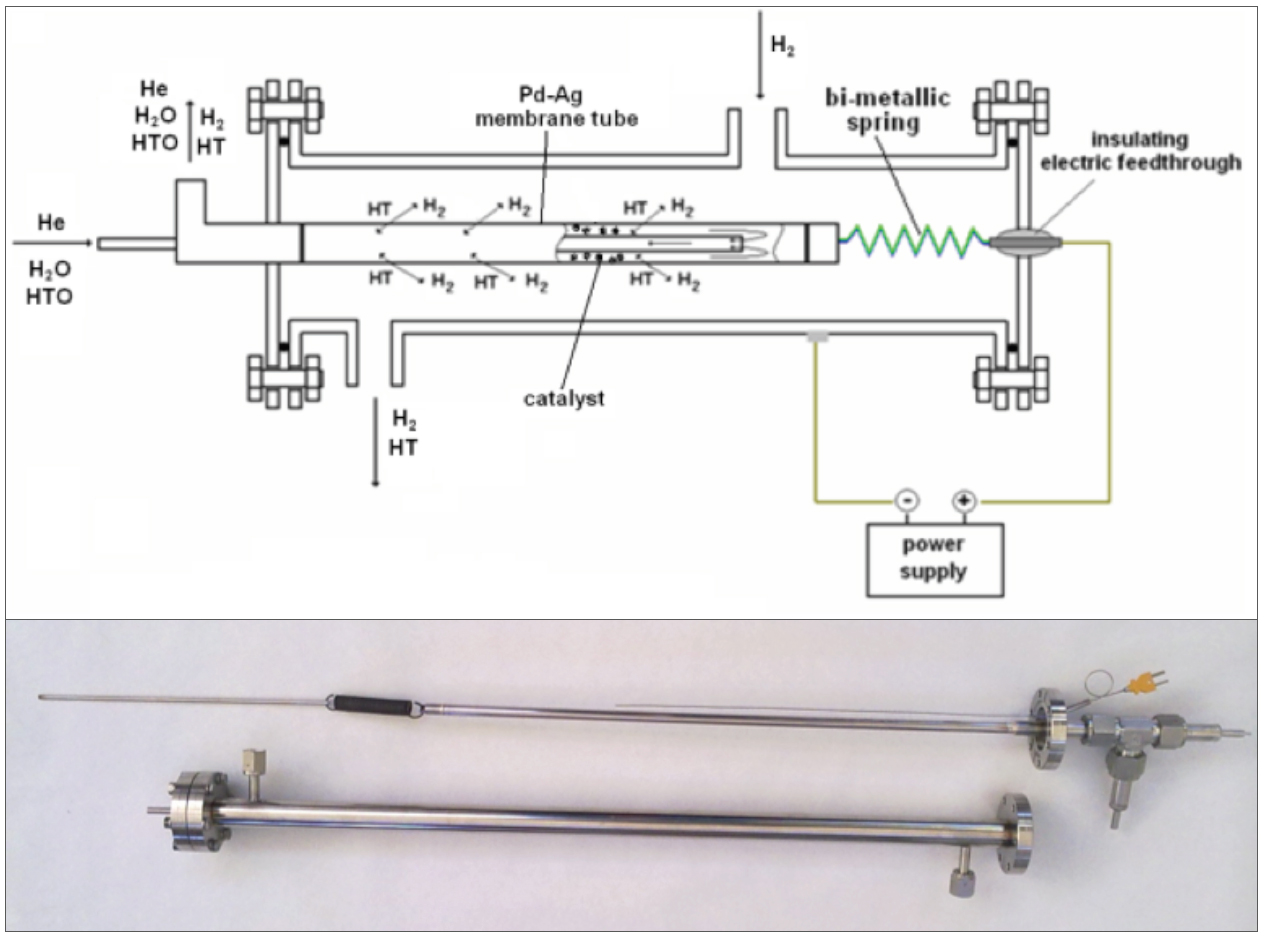 +
Fig.1 Scheme (top) and picture (botton) of a Pd-membrane reactor for the recovering of tritium from tritiated water via isotopic exchange. Fig. 1 (top) reprinted from [5], with permission from Elsevier. 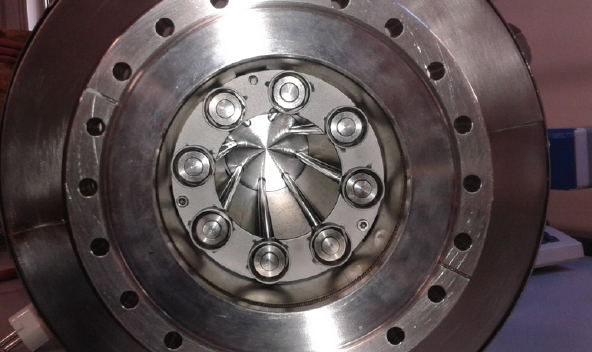 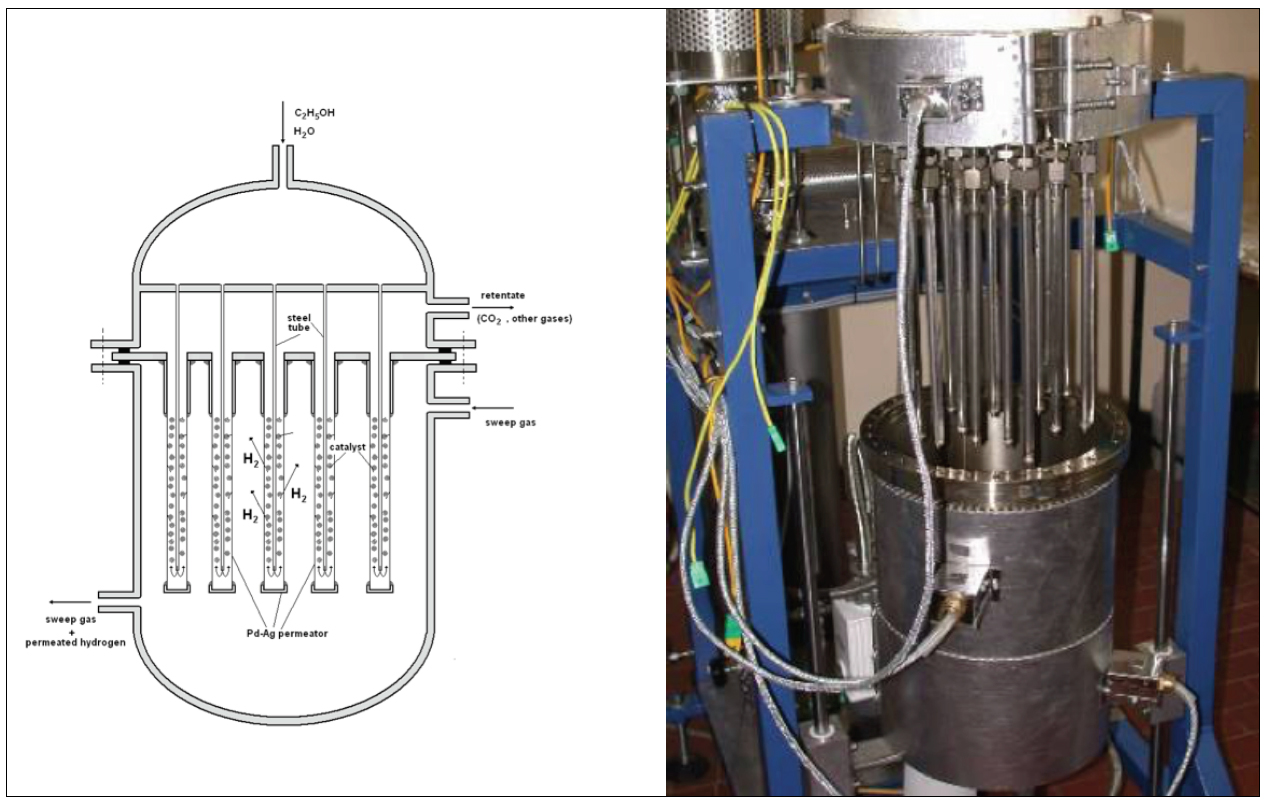 +
Fig.3 Scheme (top) and picture (botton) of a multi-tube membrane reactor for the production of hydrogen via ethanol steam reforming. Fig. 3 (bottom) reprinted from [4], with permission from Elsevier. 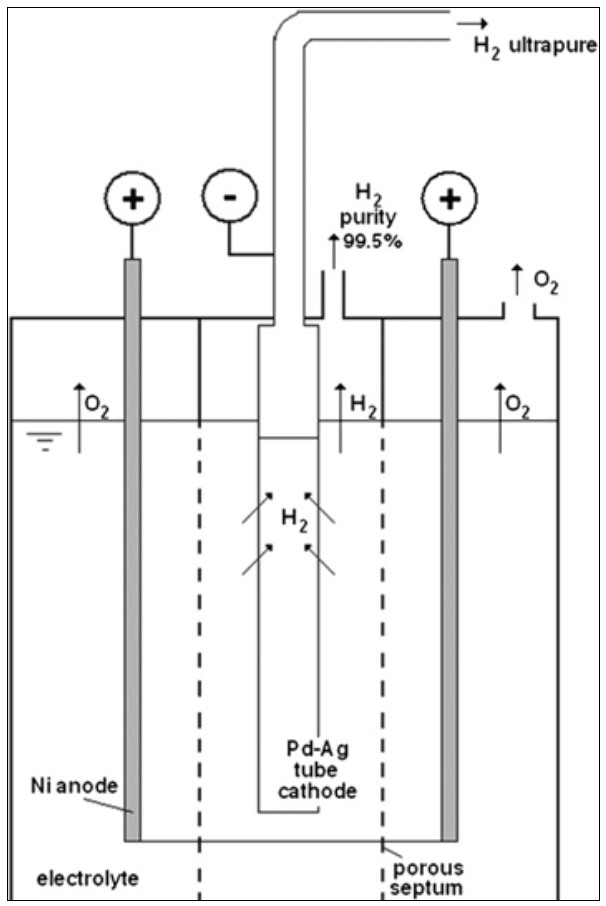 +
Fig.4 Alkaline electrolyser with Pd-Ag thin-wall tube acting as cathode. Reprinted from [15], with permission from Elsevier

+
Fig.5 Methane yield (left) and dioxins emission (right) of a hydrogasification reactor fed with 1000 kg h-1 of dry RDF and a hydrogen excess of about 40 kg h-1. Reprinted from [18], with permission of Elsevier.