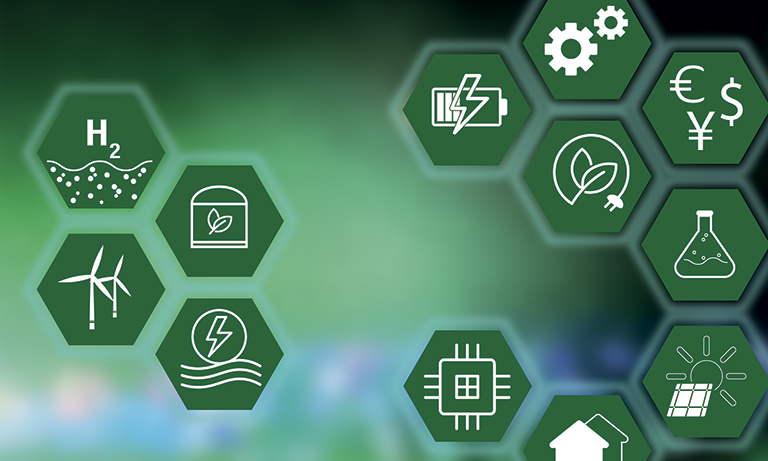 Solid oxide cells: a pivotal technology for hydrogen generation and use

The increasing penetration of variable renewable energies poses new challenges for grid management, in particular on: the efficient storage of excess renewable power, the integration of different energy grids and infrastructures (e.g. electrical, natural gas, transport fuel), and the decarbonization of transportation fuels. Solid-oxide systems are the key enablers to increase the penetration of variable renewable energy, and to allow for flexible coupling of different sectors as well as the decarbonization of transport fuels and chemical industry. In the last 15 years, ENEA consolidate knowledge, skills and procedures on this pivotal technology, exploring technical feasibility, sustainability, system integration and business opportunities.
The paper describes the Solid Oxide Cells in the actual and future energetic scenario, describing the main advantages and drawbacks, and the principal research lines and R&D challenges in which ENEA is involved

As the evolution of the energy system moves from the use of fossil fuels to low-carbon energy sources, the integration of growing shares of intermittent renewable sources into a legacy power infrastructure constitutes a significant challenge. The higher the share of renewables, the more flexible and interconnected the energy distribution grid needs to be. In this scenario, electrolysis technologies play a crucial role, being the core of power-to-X (PtX) solutions, where X can be a secondary vector such as hydrogen, syngas, or synthetic fuels, or other chemical commodities. This allows the abundance of renewable power to be transformed into other usable streams, effectively decarbonising the corresponding industrial processes, diversifying the end use of renewable energy carriers and increasing the overall flexibility – and value added – of the energy system.

Among the different electrolysis technologies, the Solid Oxide Cell (SOC) is attractive both because of unrivalled global conversion efficiencies - over 90% (electrical + thermal) - and because it can operate in reversible mode, switching between hydrogen production mode or power storage (SOE, solid oxide electrolysis) and power generation (Solid Oxide Fuel Cell, SOFC) as required. These properties make them a pivotal technology for hydrogen production, distribution and consumption, simultaneously balancing the electricity grid (Figure 1). Solid oxide technology has undergone tremendous development and improvements over the last decades. Their intense development has led to the growth of various industrial realities throughout Europe, ranging from individual cells' development and production to the construction and commercialization of small-sized modules (a few kW) up to module of hundreds of kW. Despite these advances, research and development challenges remain, tied to necessary cost reduction and lifespan enhancement, for wide deployment to be achieved.

The main activity carried out in ENEA related to SOC technology has always been the testing and characterization of solid oxide cells on a laboratory scale, conducted in the framework of European research projects (H2020, FCH-JU, etc ...). The ABI Laboratory is equipped of different test benches for SOCs testing, shown in Figure 2. Each of them can be adapted and customized to each project's requirements.

Testing and characterization of solid oxide cells samples, supplied by the leading manufacturers in Europe, is carried on at the level of button cells (1-10 cm2), single cells (up to 100 cm2) and laboratory scale power modules (short stacks, 5-6 single cells connected in series).

On these samples, the main studies are focused on: (i) the evaluation and quantification of the electrochemical performance by simulating the different operating conditions with respect to the scope of a specific project,[1 (ii) the study of the material degradation phenomena, induced by particular operating conditions or by the presence of contaminants in the fuel gas, and, last but not least,[3-4] (iii) the definition of experimental procedures for the qualification of the performance of commercial cells and modules. Typical outcomes of experimental SOC testing and characterization activity is summarized in Figure 3.

All these activities allowed to consolidate knowledge, skills and procedures in line with those currently present in the other European research centres, with which the laboratory has collaborated, but also to develop more advanced investigation methodologies such as the analysis of the Distribution of Relaxation Times (DRT) or the development of localized gas sampling for in-operando chemical and electrochemical reactions monitoring.

Other activities conducted by the laboratory and related to SOC technology are the Life Cycle Assessment (LCA) studies and the standardization of experimental procedures in liaison with standardisation bodies (IEC). Moreover, the ABI laboratory carries out other cross-cutting activities such as the definition of new regulatory standards and the provides support to national and European institutions for the development of road maps, strategic industrial plans and KPIs for project financing platforms in the field of solid oxide cells and their applications.

Considering the technological maturity level reached by SOCs, and given the particularly favourable moment for their next market penetration, both in the production of power but, above all, in the generation of hydrogen, the aforementioned laboratory skills could be put at the service of two future strategic activities:

The SOC is a high-temperature technology, operating at 600-800°C, and which is the reason for the high conversion efficiencies in both operating modes. It is especially promising in industrial contexts, where steam is available as a process stream and can be directed towards the generation of hydrogen at unmatched efficiencies in an SOC. For example, the steel industry is particularly interested in utilising hydrogen for the production process to replace coal and carbon-containing reagents for iron ore reduction, high-temperature treatment and other process steps. Other chemical industry processes apply as well.

Working flexibly, the SOC can give rise to innovative business propositions where price arbitrage of renewable power connected to the grid can provide adequate revenue streams, or where energy communities want to progressively emancipate themselves from grid connection.

ENEA is active on all these fronts, exploring technical feasibility, sustainability, system integration and business opportunities. ENEA has built up a comprehensive network of research and industrial partners in this process, articulated in a number of European projects:

The most recent EU projects, coordinated by ENEA, started in 2021: SO-FREE (FCH-JU, 101006667) focused on the development of a versatile (fuel-flexible), SOFC-based system for combined heat and power (CHP) generation, and PROMETEO (FCH-JU,101007194) based on the integration of SOEC technology with renewable (solar) sources.

Furthermore, the engagement of the Laboratory is further increased by the membership and participation in the International Electrotechnical Commission’s Technical Committee on Fuel Cells (IEC TC105), the International Energy Agency’s (IEA) Technology Collaboration Programme on Advanced Fuel Cells, the European Energy Research Alliance’s (EERA) Joint Programme on Fuel cells and hydrogen, the International Partnership for Hydrogen and fuel cells in the economy (IPHE), Hydrogen Europe Research, the Clean Hydrogen Alliance and the national association H2IT.

The European long-term strategy (EU Commission 773-2018) provides the achievement of Carbon Neutrality by 2050, through an increase in renewable electricity generation, a drop in oil and coal consumption and the increment of biomethane and hydrogen usage. In this frame SOCs technologies will play a central role, acting as a vital link between the electric, gas, and thermal grids and providing fuel for the transportation sector. Moreover, it is especially promising in industrial contexts, where steam is available as a process stream and can be directed towards the generation of hydrogen at unmatched efficiencies in an SOC. The experience and European collaboration network on SOCs technologies accumulated over the years by ABI laboratory in ENEA, allow to position itself among the future specialists in the energy transition processes, continuing research and development activities to achieve further performance enhancements and cost reductions on cell, stack, and system level. 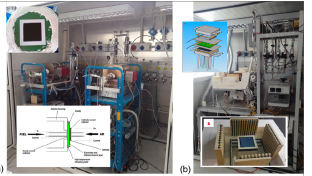 +
Fig. 2 ABI laboratory test benches for SOC button cells in (a) and for single cells and short stack in (b)