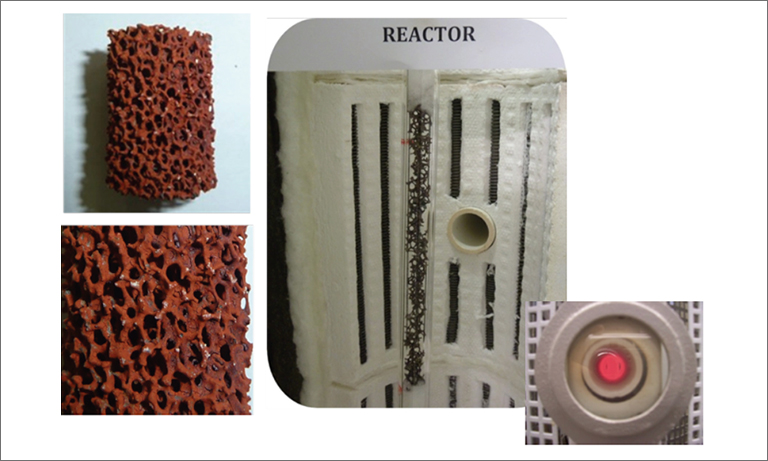 In view of a diversification of energy sources and technologies for green hydrogen production, ENEA, since 2005, has been working on the development of water splitting thermochemical cycles powered by concentrated solar energy, participating in several research projects within National and European programs. Particularly ENEA has developed a unique expertise on materials and components with the aim of identifying critical aspects and defining innovative solutions to bring this challenging technology to an industrial maturity. To this end, within the Electric System Research programme, ENEA is currently investigating a “modified Sulphur – Iodine” thermochemical cycle, to increase both the thermal efficiency of the hydrogen production route and the technical feasibility of its integration with the solar technology. Innovative materials are under study and the preliminary results show that the use of intermediate solid reactants can be the key to reduce the maximum operating temperatures and the energy consumption of the separation steps.

The decomposition of water molecules by using renewable energy can be considered as the most straightforward pathway to green hydrogen production. In this perspective, water electrolysis powered by renewable electricity is currently the most technologically mature process; however, water splitting can also be achieved through alternative processes powered by high-temperature renewable heat, thus complementing electrolysis in a future flexible and resilient energy system based on multiple renewable energy sources and technologies.

The direct thermal decomposition of the H2O molecule can be achieved at temperatures higher than 2500°C; however, the implementation of this process is hindered by several technological challenges related to the very high operating temperature and to the handling of hydrogen-oxygen mixtures, which pose material and safety issues, and require complex gas separation operations [1]. To overcome these problems, the splitting process can be divided in multiple steps, where hydrogen and oxygen are produced separately and the maximum operating temperature is significantly reduced [2]. This is the approach followed by the so-called Thermochemical Water Splitting Cycles (TWSC), which are based on cyclic sets of chemical reactions involving different species, whose net result is water splitting. TWSCs typically require heat below 1500°C, which can be conveniently supplied by concentrating solar thermal plants, resulting in green hydrogen production.

Several TWSCs have been proposed since the 80’s [3]. Figure 1 shows three of the most significant examples: in the “Sulphur Iodine” cycle (a), water is incorporated into two chemical species, typically acids, which are eventually decomposed [4]; in another widely investigated alternative (b), steam reacts with a reducing agent (Iron (II) in the example reported [5]) producing hydrogen and, subsequently, the resulting oxide is thermally split to obtain oxygen; a third option (c) includes an electrochemical step for hydrogen production, as in the “hybrid sulphur” process [6].

Overall, TWSCs can be classified according to the number and types of reactions involved, as summarized in Table 1.

Table 1 - Types of TWSCs according to types and number of reaction steps.

Three main challenges need to be addressed for the further development of this technology:

ENEA has been active in the field of TWSCs since 2005 by participating in several research projects within National and European programs. In this 16 years period, ENEA has developed significant expertise on the most critical aspects of this technology, by carrying out activities such as the investigation of reaction steps (catalysts, materials, reactors, etc.), the development of lab-scale and pilot-scale on-sun prototypes (in collaboration with other organizations), process design optimization and techno-economic analyses.

Overall, ENEA’s activities have been mainly aimed at improving the reacting materials in terms of reaction yield, chemical stability and thermal coupling with the concentrating solar technology. Particularly, with regards to the latter point, research activities have been focused on the reduction of the maximum operating temperatures of the TWSCs in order to adopt conventional structural materials for solar receivers, increasing their thermal efficiency.

ENEA’s activities on this topic started within a FISR National project (TEPSI, 2005-2009), focusing on the “Mixed Ferrites” and the “Sulphur Iodine” cycles (Figure 1a). The former is an original process developed by ENEA, which is conceptually similar to the two-steps metal oxides cycles represented in Figure 2b; in this process, a manganese ferrite (MnFe2O4), appropriately synthetized by ENEA, is reacted with sodium carbonate and steam to produce hydrogen, while the obtained material is reacted with CO2 to release oxygen [8]. This method is very appealing for the relatively moderate operating temperatures (750-800°C) of both reactions, in particular the oxygen releasing step, which is considered the limiting step for the practical exploitation of most metal-oxide TWSCs. The “Sulphur Iodine” cycle, which is based on the adoption of commonly available acids and has a maximum operating temperature of 850°C, was thoroughly investigated by ENEA, from the extensive characterization of the involved chemical reactions and separation phases [9,10,11,12], to theoretical modelling and flowsheeting of the whole process [13]. As a result, the technical feasibility of the process and its economical sustainability were evaluated [14], and a bench-scale plant (with nominal capacity of 10 NL/h of hydrogen), was built and tested at ENEA laboratories [15], representing the first European demo for this technology.

The experience gained within the aforementioned projects allowed ENEA to identify the main solutions required to enhance manageability and efficiency of the “Sulphur Iodine” process, and particularly of the challenging steps sulfuric and hydriodic acids splitting, characterized by safety/material compatibility and limited conversion issues. Indeed, the catalytic decomposition of H2SO4 requires severe operating conditions (acid environment at high operating temperatures, around 850°C [17]), while hydriodic acid (HI) splitting, which occurs at lower temperatures (<500°C), is thermodynamically limited [4]. In order to cope with these limitations, ENEA has investigated several process alternatives, developing several patents [20,21,22]. As an example, an alternative process configuration, powered by a combined solar/fossil energy source, with hydrogen and methanol co-production, was proposed to increase the efficiency and the technological sustainability of the high temperature reaction [23]; this alternative process exploits methane/biogas combustion to feed the high-temperature cycle step, while most heat required at medium temperatures (< 500°C) is supplied by linear focusing CSP technology. Therefore, methane combustion is proposed not only to supply thermal energy to the sulphuric acid decomposer, but also to convert the hydrogen generated by the cycle into methanol through the reaction with CO2 contained in the flue gases [20], in a neutral CO2 balance (Fig. 3).

Other patents focus on the use of oxides and metals as intermediates, leading to the formation of the related sulphates and iodides that are split in place of the corresponding acids [21,22,24]. The significant advantage of this methodology is that pure hydrogen production can proceed at nearly room temperature without thermodynamic limitations; furthermore, oxygen formation can be carried out without catalysts and at temperatures below 900°C [7]. Moreover, depending on the metal used as intermediate, the formation of low-solubility species allows for easier separation processes and storage of products [7, 25], thus de-coupling the solar energy step from hydrogen production.

Currently, TWSCs are among the research topics included in the Electric System Research Programme funded by the Italian Ministry of Economic Development (Implementation plan 2019-2021). In this context, ENEA is continuing to investigate a “modified Sulphur Iodine” scheme, based on the patents developed in the last years and described in the previous sections. In fact, these alternative approaches have the potential to improve the thermal efficiency of the process, which is 20% without any heat recovery [7]. The target of the activity is to bring the TRL of this alternative “Sulphur Iodine” cycle from the actual 2 to 3.

Innovative materials are currently investigated, with the focus to optimize the composition of the intermediate solid reactants (metals, oxides and sulphates) employed in the cycle (Fig. 4). In particular, the selected chemicals should be featured by low toxicity and low environmentally impact, along with low cost and favourable chemical-physical properties. Regarding the latter point, the investigation is being dedicated to select and validate products that are insoluble or low-soluble in the liquid reaction mixtures in order to reduce the heat demand of the separation processes (i.e. further increasing the cycle efficiency) and to facilitate handling and storage of the same intermediates. Activities in progress are specifically dedicated to the experimental characterization of each step of the water-splitting process, with the aim to select the most promising configuration; a flowsheet analysis is also being performed in order to assess the investment and operative cost of the complete process loop.

TWSCs are also part of the strategic research and innovation agenda developed by Hydrogen Europe in the foreseen public-private partnership Clean Hydrogen for Europe. In this context, water splitting powered by solar heat is considered among the environmentally neutral processes that, in addition to water electrolysis, can be used in the future for green hydrogen production. A roadmap to significantly advance the technology readiness level of these processes in the next 10 years is also traced. The development of solutions to achieve an overall efficiency of 20%, and the deployment of demonstration projects on the MW scale, are identified as key actions to achieve the development and operation of the first 10 MW demonstration project and decrease the hydrogen production costs from the current 4-7 €/kg (Table 2) to nearly 2 €/kg by 2030, thus bringing the technology closer to the market.

Even if water electrolysis is considered s the most mature approach for green hydrogen production, the development of thermochemical water splitting cycles powered by concentrated solar energy can represent a complementary strategy to fully exploit different energy sources available in different geographical contexts and to favour large scale hydrogen productions thanks to the intrinsic scale-up capability of thermochemical processes.

In accordance with the strategic research and innovation agenda developed by Hydrogen Europe, and within the Electric System Research Programme, ENEA is currently developing a “modified Sulphur Iodine” thermochemical cycle, based on the patents developed in the last years, to increase both the thermal efficiency of the hydrogen production route and the technical feasibility of the integration of the solar technology with the chemical process. The target of the activity is to bring the technology readiness level (TRL) of this alternative “Sulphur Iodine” cycle from 2 to 3, identifying suitable intermediate solid reactants to reduce the maximum operating temperatures and the energy consumption of the separation steps.

+
Fig.2 On the left, supported catalyst for SO3 decomposition developed by ENEA within the SOL2Hy2 European Project; in the center, catalyst sample placed inside the quartz lab reactor; on the right, catalyst in the quartz tube in operation during SO3 splitting tests in the HycycleS European Project. 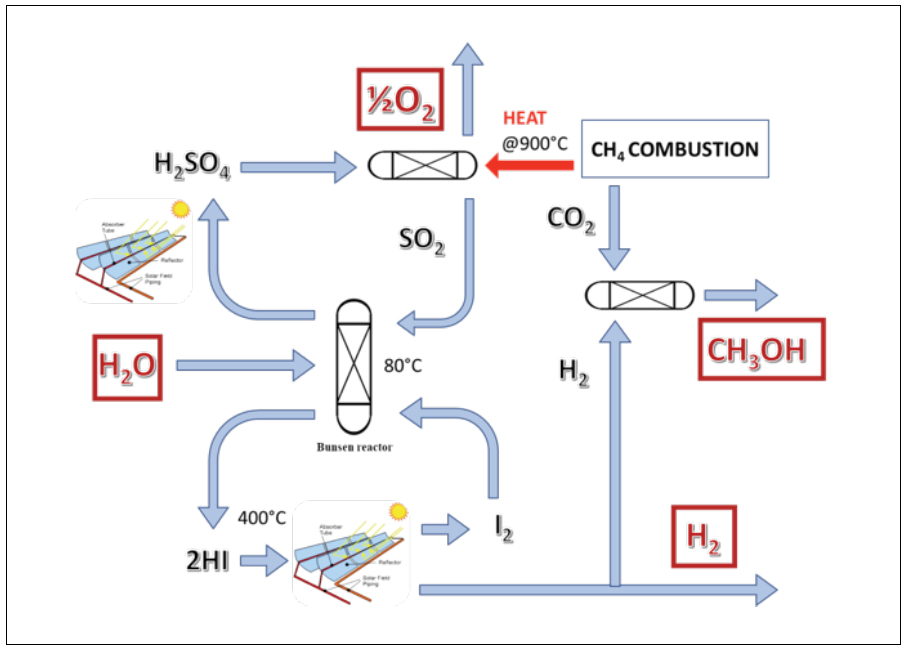 +
Fig.3 Alternative of the “Sulphur Iodine” scheme where H2SO4 cracking is driven by methane combustion. The obtained CO2 is reacted with part of the produced H2 in order to synthetize methanol. 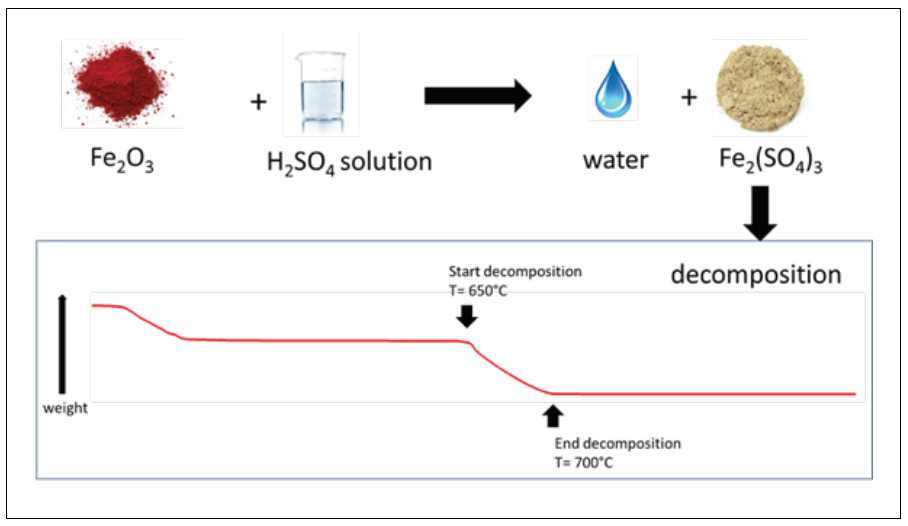 +
Fig.4 Alternative decomposition of sulfuric acid: the acid concentrated solution is reacted with Iron(III) oxide obtaining Iron(III) sulphate. The latter, as illustrated in the thermogravimetric pattern on the bottom, decomposes into Iron(III) oxide, sulphur oxides and oxygen at a lower temperature level than H2SO4 itself (between 650°C and 700°C).