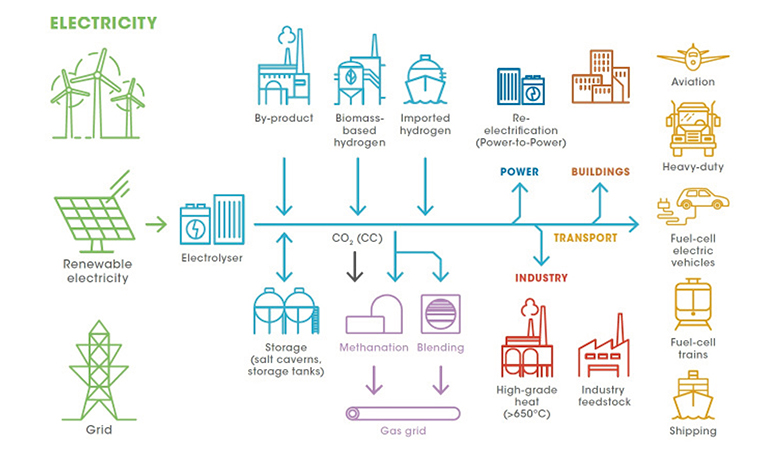 The key role of PtG technologies in the Italian Energetic System

Power to Gas (PtG), namely the conversion of electric energy into gas, hydrogen or synthetic methane could allow European Countries to achieve the ambitious decarbonization targets foreseen in their energetic transition roadmaps. The paper underlines how those goals could be attained and the impacts over the Italian energetic system of the electric/gas network integration. The PtG technologies, their maturity, the challenges and the necessary habilitation actions are listed and analyzed. In this context, ENEA is developing several activities that cover different aspects of the value chain, starting from water electrolysis to methanation process. Currently in ENEA there is a multidisciplinary expertise on PtG that ranges from materials (membranes for electrolysers and fuel cells, catalysts for the chemical reaction of methane synthesis, microorganism for biological methane synthesis) to the study of processes at laboratory and pilot scale. Other activities are focused on modelling and simulation related to processes and plants and to the regulatory aspects of coupling electric and gas networks. The general approach involves experimental activities on different scales and TRLs as well.

European and national energetic roadmaps foresee a continuous growth of renewable power production [1,2]. The PNIEC [3] states to set the renewable target up to 30% of the gross final energy consumption. PtG, allowing the long-term, even seasonal, electric energy storage in 100% renewable vectors, its long distance transportation and distribution, favours renewable power penetration and exploitation. Other PtG impacts comprise the decarbonization of industrial and final energy user, especially of those hardly electrifiable, as some industrial and mobility sectors, and a larger sustainability, security and flexibility of the national energetic system.

The PtG technologies role is evidenced in “Documento di Descrizione degli Scenari Terna–Snam 2019” [4], the most ambitious scenario foresees a growing green gases demand, up to 6.5 Mm3/year in 2040, shared between synthetic methane and hydrogen.

PtG refer to the conversion of energy from electrical to chemical, in the form of gaseous hydrogen (PtH – Power to Hydrogen) or other carbon compounds hydrogen-derived, such as methane (PtM – Power to Methane).

Figure 1 illustrates the large variety of PtH/PtM employment: the hydrogen from renewable power can be used locally in industrial processes, transported by a grid for mobility applications, converted into methane or again into power by feeding fuel cell systems, or can be stored.

Another benefit of PtG is the valorisation of the existing gas infrastructures, avoiding electricity grid implementations, through the electricity and gas networks integration, the sector coupling. Being the current gas grid and end-users immediately ready for synthetic methane use, PtM can be considered an enabling technology toward the energy transition in the short term, particularly in Italy, where the gas grid is extended and capillary; moreover, it gives an opportunity to valorise unavoidable carbon dioxide emissions.

PtG term refers to a set of different processes and technologies. The hydrogen production is attained by water electrolysis, at large energetic expenses. Currently three electrolytic processes can be considered market-ready: alkaline electrolysers (AEL), the most mature technology, polymeric membrane electrolysers (PEM), and the most recent solid oxide electrolyzers (SOEC). AELs use an alkaline solution (KOH or NaOH) at atmospheric or slightly higher pressure; PEMs polymeric membranes for protonic exchange; SOECs work at 700-800°C, their strength is reversibility, they can return power to the grid if necessary.

The thermochemical methanation [5] is a catalytic (Sabatier) process: the reaction of H2 with CO2 to get synthetic natural gas at 250-550°C and elevated pressures; CO2 can derived from biogas, syngas from gasification, industrial flues, or other. The reaction is highly exothermic, making temperature control the most challenging aspect. The valorisation of heat takes place for example in biogas upgrading plants, or industrial processes or district heating networks or greenhouses.

A second methanation process, the biological one, utilizes methanogen microorganisms, as Archaea, acting as biocatalysts at 20-70°C and pressure higher than atmospheric one.

The more expensive green hydrogen and methane costs with respects to fossil gases represent a definite drawback, to be overcame by government incentives, particularly in the assessment and technological development step.

Normative to get hydrogen utilization, transportation and storage feasible are under development. A hydrogen and methane green origin certification and guarantee are welcome.

Enabling actions should break technological, economic, financial and normative barriers: the role of governance, research and industrial stakeholders and their synergic involvement is crucial. Among the specific actions to be undertook to reduce the gap with respect to conventional technologies are the development and validation of demonstrative projects in small energy district and a dedicated research plan.

Power-to-Gas (both PtH e PtM) is a promising process ensemble that include different technologies with different TRL values, some of those are commercially available however their implementation in the power to gas chain is still being evaluated. Consequently, further R&I efforts are needed to reduce technology and non-technology costs, to improve performances and to promote technology deployment to market.

Currently in ENEA there is a multidisciplinary expertise on PtG that ranges from materials (membranes for electrolysers and fuel cells, catalysts for the chemical reaction of methane synthesis, biological process) to the study of processes at laboratory and pilot scale. Other activities are focused on modelling and simulation related to design of processes and plants and to the regulatory aspects of coupling electric and gas networks. The general approach involves experimental activities on different scales and TRLs as well.

Moreover ENEA performs techno-economic evaluation of the whole PtG value chains for different feasible pathways and for the expected intermediate and final products. This analysis aims to evaluate replicability and scalability of PtG configuration considering the different value chain (different final use, sector coupling, geographic area, energetic scenario). In this way, business models aim to evaluate economic performance providing Levelized Costs of Hydrogen (LCoH), Energy (LCoE), methane LCoX. ENEA carry out assessment of the expected impacts of the project on end-users and the community by means of key performance indicators (KPI) as well.

MENHIR plant is a modular, moveable and containerized facility. The facility is composed by an electrolyser and a methanation unit. The alkaline type electrolyser is able to produce hydrogen up to 4 Nm3/h (24 kWe). The methanation section was designed to test catalysts, reactors type, able to work in cooled or adiabatic conditions, and process setups. The methanation section aims to produce a gas up to 1-2 Nm3/h, ready to be injected in the gas grid. The experimental plant is equipped with several sensors and a data acquisition system suitable to monitor and control the main operating process parameters.

The plant is also fully flexible in its modularity, so new hydrogen production systems, new reactors or processes, can be inserted into the infrastructure using the existing auxiliaries equipment. Finally, the plant is suitable to be implemented with other energy storage systems such as batteries to support the electrolyser or thermal storage for heat management of the methanation process.

The reasons for the development of PtG in the Italian energetic system include strategic reasons as larger power network stability and a larger independence from foreign fossil energetic suppliers. In the Italian context, different stakeholders are already actively involved in PtG technologies, confirming the high level of interest and the possible positive industrial growing in the field. The PtG plants could carry benefits in the assessment of a new industrial chain. The different areas that could benefit are both the end-users and suppliers, as the energetic sector, particularly the energy from RES and gas producers the chemical, engineering industry and the heavy CO2 emitters/producers.

Concrete actions to reduce the gap with conventional technologies can be found in the development of demonstrative plants, in a research plan aimed at overcoming the barriers, in a legislation that can accelerate the effective deployment and better define incentives to sustain creation of case studies. Over a longer period, it would be desirable to design and build infrastructures that involve the management and large-scale use of hydrogen and the storage of renewable energy in the form of gas.

Research Institutions can play a fundamental role in overcoming existing scientific and technological barriers and helping policy makers to take the necessary actions to encourage the use of technology on a large scale. The contribution of research should act synergically with the industrial world. In particular, ENEA, in its institutional capacity, is candidate to play an effective role in the development of the technologies involved in the PtG chain, contributing to the development of individual technologies, from the technological and regulatory aspect, acting as stakeholder aggregator.

In that field, ENEA has recently proposed the Hydrogen demo Valley Project aimed to create an infrastructural hub for testing and demonstration of hydrogen technologies. It will cover production, storage, distribution and utilisation of hydrogen (in blends with natural gas as well), for applications in the energy, industrial, residential and transport sectors.

The multifunctional infrastructure will be implemented in the Casaccia Research Centre of ENEA, north of Rome, to act as a breeding ground for hydrogen value chain technologies and services with the aim of accelerating their deployment in view of the energy transition and overall decarbonisation.

Beside this context, ENEA has signed two Collaboration Agreements with SNAM and SGI, among the most important TSOs in the gas sector in Italy. Moreover, ENEA and Confindustria have signed a collaboration agreement that aims to develop industrial hydrogen value chains, innovative solutions and possible operational scenarios, through a strengthened collaboration between research and industry. A working group of ENEA and MISE is running support activities for companies and defining a IPCEI hydrogen project.

Power to Gas could allow European Countries to achieve the ambitious decarbonization targets foreseen in their energetic transition roadmaps. The main features of a PtG introduction are the possibility to store electric overproduction from renewables and a complete fossil fuel replacement with green gases in every sector, from energy production to industry, from mobility to residential heating. In this context, ENEA is developing several activities that cover different aspects of the value chain, starting from water electrolysis to methanation process. In a framework where PtG seems particularly attractive for Italy due to its already existing capillary national gas grid, ENEA has recently proposed the Hydrogen demo Valley Project and has in pipeline the realization of the MENHIR pilot plant. 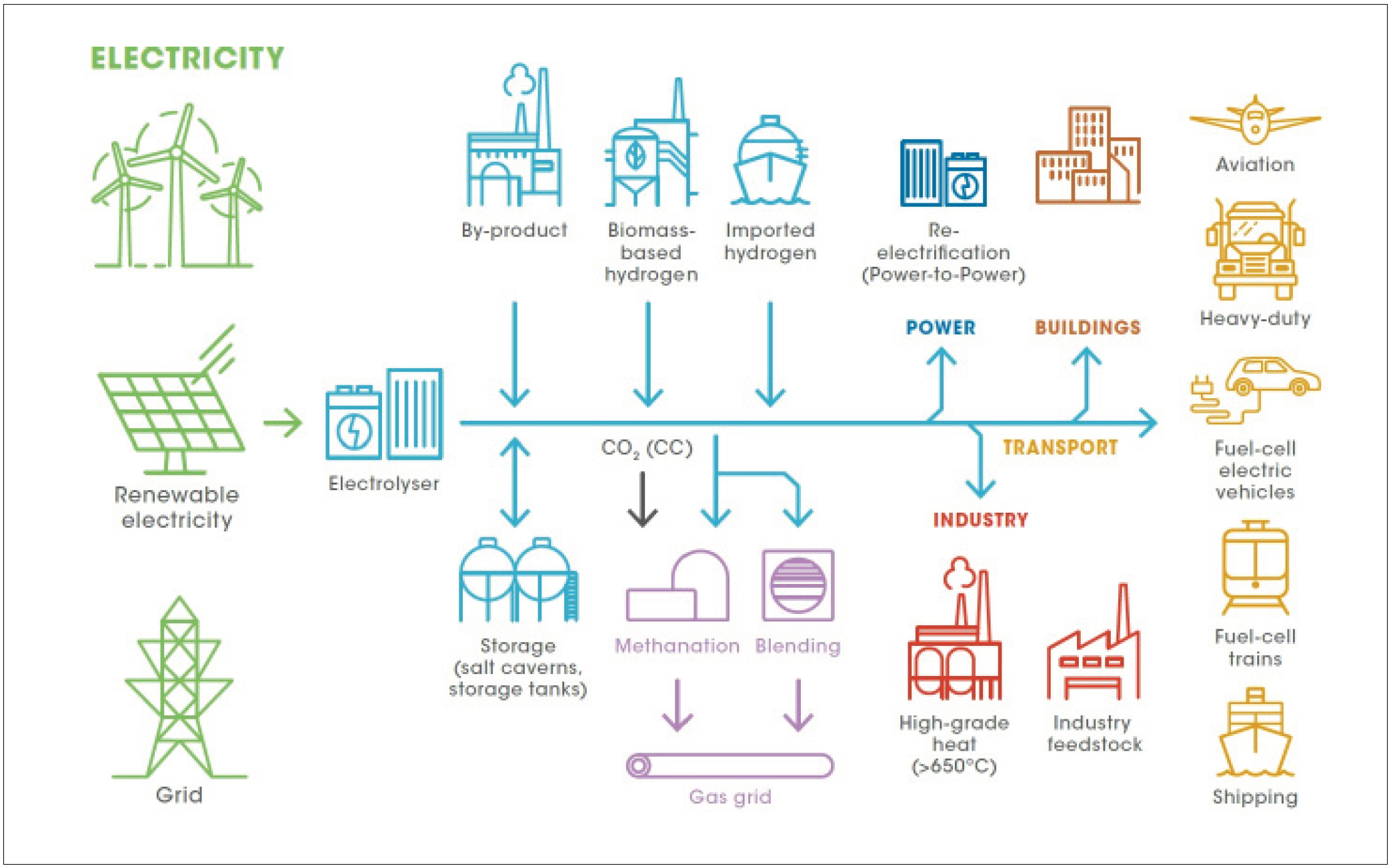