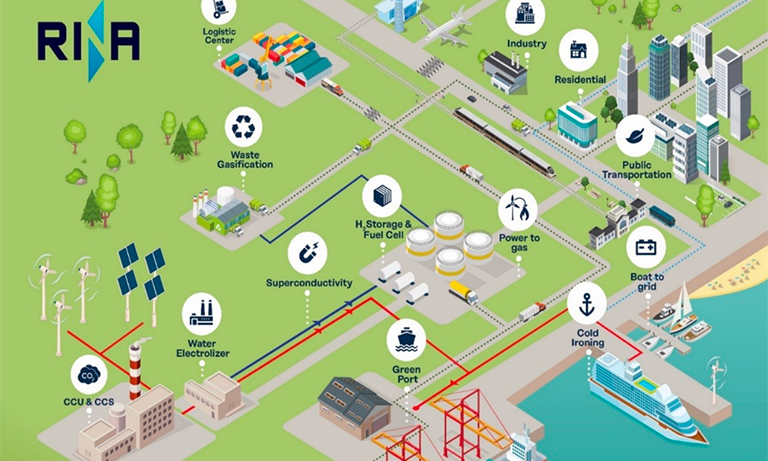 by Andrea Bombardi and Antonio Lucci

In the not-too-distant future, there will be a trend towards the production of green hydrogen from renewable energy obtained by electrolysis. In this area, RINA is committed to enabling new hydrogen technologies by experimenting with new materials thanks to a laboratory capable of testing materials for storage and transport at pressures of up to 1,000 bar. It is also closely cooperating with ENEA in order to integrate thermal conversion technologies for syngas and green hydrogen production. 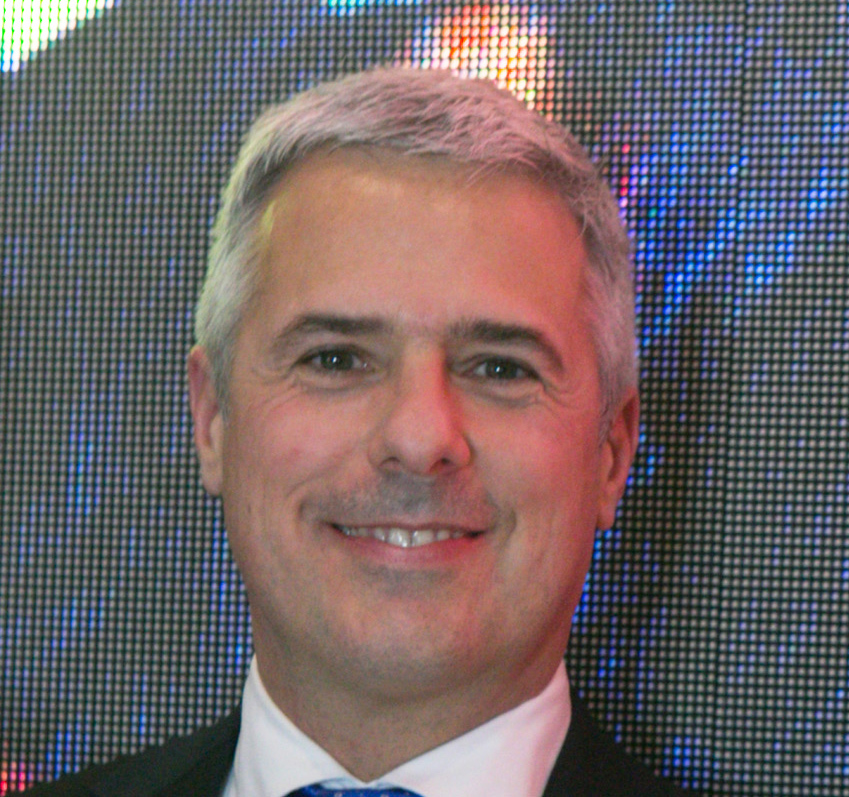 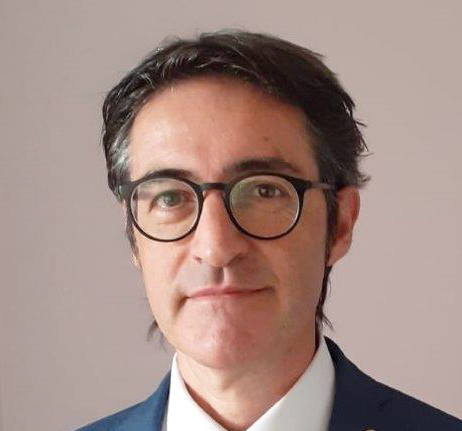 Following the 2015 Paris Agreement, targets were set for a 40% cut in CO2 emissions by 2030 and zero greenhouse gas emissions by 2050. The IMO adopted these targets in 2018 and set out a strategy to reduce average carbon intensity by 40% by 2030 and cut overall CO2 emissions by 50% by 2050. Ports and port infrastructures are essential for the EU, but as well as being strategic assets, they are also major sources of emissions. One ship moored at a dock for a day can produce as much CO2 as 20 medium-sized cars in a year. Not to mention all the other activities carried out in the port including handling goods, cold storage, systems for providing continuous power or heating buildings, plus road and rail transport. The first step in decarbonising ports is to improve the efficiency of infrastructure and processes related to logistics. However, in order to achieve the target, it is necessary to implement and optimise technologies that have not yet reached full maturity. In a medium-term scenario, fuelling vessels with Liquefied Natural Gas (LNG) is a proven and available technology that would mitigate most emissions of pollutants such as sulphur, nitrogen oxides and particulates. Although these emissions would be significantly reduced, CO2 emissions would not be: the maximum theoretical reduction in greenhouse gases would only be 20% compared to heavy fuel oil.

The best solution would be to capture the CO2 emitted both while sailing and while in port. This is an attractive but unrealistic scenario. Further contributions to reducing pollution could be made by modernising port infrastructure and renewing fleets. It would also be possible to improve the efficiency of buildings and install renewable power generation on site, such as photovoltaic and thermodynamic solar panels on roofs and façades, as well as hybrid propulsion for port logistics vehicles.

In a medium-term scenario, it will be possible to implement cold ironing, a technologically mature solution that reduces emissions from ships in port by connecting to the electricity grid on shore. This, together with port digitalisation or the use of hybrid ro-ro ships (roll-on/roll-off ships for transporting vehicles with wheels), would make it possible to eliminate overall emissions in port. At present, limitations of this solution are the scarce availability of renewable energy and the cost of electricity, which compared to the cost of generation on board is neither competitive nor sustainable.

Hybrid power with batteries is a technology that can help to reduce emissions, but it is only economically viable for short distances. Technological advances could make its application wider in the future.

There are now ships, certified by RINA, that can produce zero CO2 emissions in port. Their energy needs are met using batteries with adequate capacity.

Hydrogen, along with its entire value chain, and ammonia deserve a special mention. As an energy carrier, hydrogen can store large quantities of energy. Its only emission is water, both when used as a fuel and in fuel cells. It is a particularly clean carrier for all maritime transport applications and for powering land-based logistics systems (forklift trucks....). In the not-too-distant future, there will be a trend towards the production of green hydrogen from renewable energy obtained by electrolysis. In this area, RINA is committed to enabling new hydrogen technologies by experimenting with new materials thanks to a laboratory capable of testing materials for storage and transport at pressures of up to 1,000 bar.

Furthermore, new technologies that can combine material valorisation and hydrogen production are under development. RINA is also an advisor to the University of Cagliari within the IMPATTI-NO 2°Call project of the INTERREG IT-FR Marittimo Programme. In this technological strand, RINA is working on the valorisation of collected solid materials dispersed in port water (plastics, rubber, fibres, biomass...) and is cooperating with ENEA in order to integrate new thermal technologies  processes aimed at the production of a syngas, hydrogen and valuable chemicals for port fuel and energy demand. These technologies are aimed at making port activities more sustainable and reducing CO2 emissions.

RINA is currently closely cooperating with ENEA in order to integrate thermal conversion technologies for syngas and green hydrogen production. The objective is decarbonisation of industrial and transportation sectors. Ammonia obtained from green hydrogen could be a very promising fuel. It can be used in internal combustion engines and stored at room temperature. Issues of transport and logistics are well established. The downside is its toxicity and the absence of commercially available solutions for marine propulsion.

A roadmap for the green transition

Around the world, there are examples of applications and demonstrators of the most advanced technologies. Cold ironing systems are used in Los Angeles, Marseille (investment allocated not yet operative), Hamburg and Gothenburg.

Projects and demonstrators using hydrogen as a power source for land-based logistics systems have been launched in Europe. The Port of Valencia will be the first in Europe to use hydrogen in its operations and plans to install a mobile hydrogen station to power container handling equipment. The first hydrogen-powered vessels are starting to be built (e.g. Port of Antwerp, Ferguson Marine Engineering is building the first renewables-based hydrogen ferry for Orkney, Norled-LMG Marin agreement for hydrogen-powered ferries and batteries in 2022). In Rotterdam, the Port Authority is working towards the introduction of a large-scale hydrogen network across the port complex, to become an international hub for hydrogen production, import, application and transport to the Northwest Europe.

Italy is still lagging behind. However, for the use of hydrogen in the maritime sector, studies and research are underway which will see Italy involved with the main national manufacturers. RINA, which has been active in the port infrastructure sector for over 30 years, has launched and supports initiatives to develop new technologies in the field of port and naval engineering. The TecBia project involves the commissioning of a hydrogen-powered electric boat with fuel cells and hydride storage. RINA is involved in relation to the regulatory and safety aspects.

In the context of the ambitious scenario of zero CO2 emissions by 2050, ports are the most suitable places to start the green transition. This is because they can positively influence the related infrastructures, cities, industries, transport and logistics systems. The Italian port infrastructure has the opportunity to play a strategic role. A process of innovation must be initiated and supported to overcome some critical issues.

A tariff system for electricity supplies from cold ironing should be promoted, making the exchange sustainable and advantageous compared to generation on board. It is also necessary to consider the freight transport chain as a whole and to integrate port and rail infrastructures in order to increase the competitiveness of the logistics chain.

In this context, new technologies can be adopted that also leverage the recent collaboration agreement between RINA and ENEA. This was signed in the spirit of supporting and strengthening the growth and competitiveness of companies through the transfer of innovative technologies.

It is therefore essential to identify a roadmap for the green transition through systematic and coordinated actions with interventions in the decarbonisation chain (hydrogen, renewables, CCS). This can be launched with the support of national and European funding and sustained over time thanks to the digital and green innovations that will make port infrastructures competitive and attractive 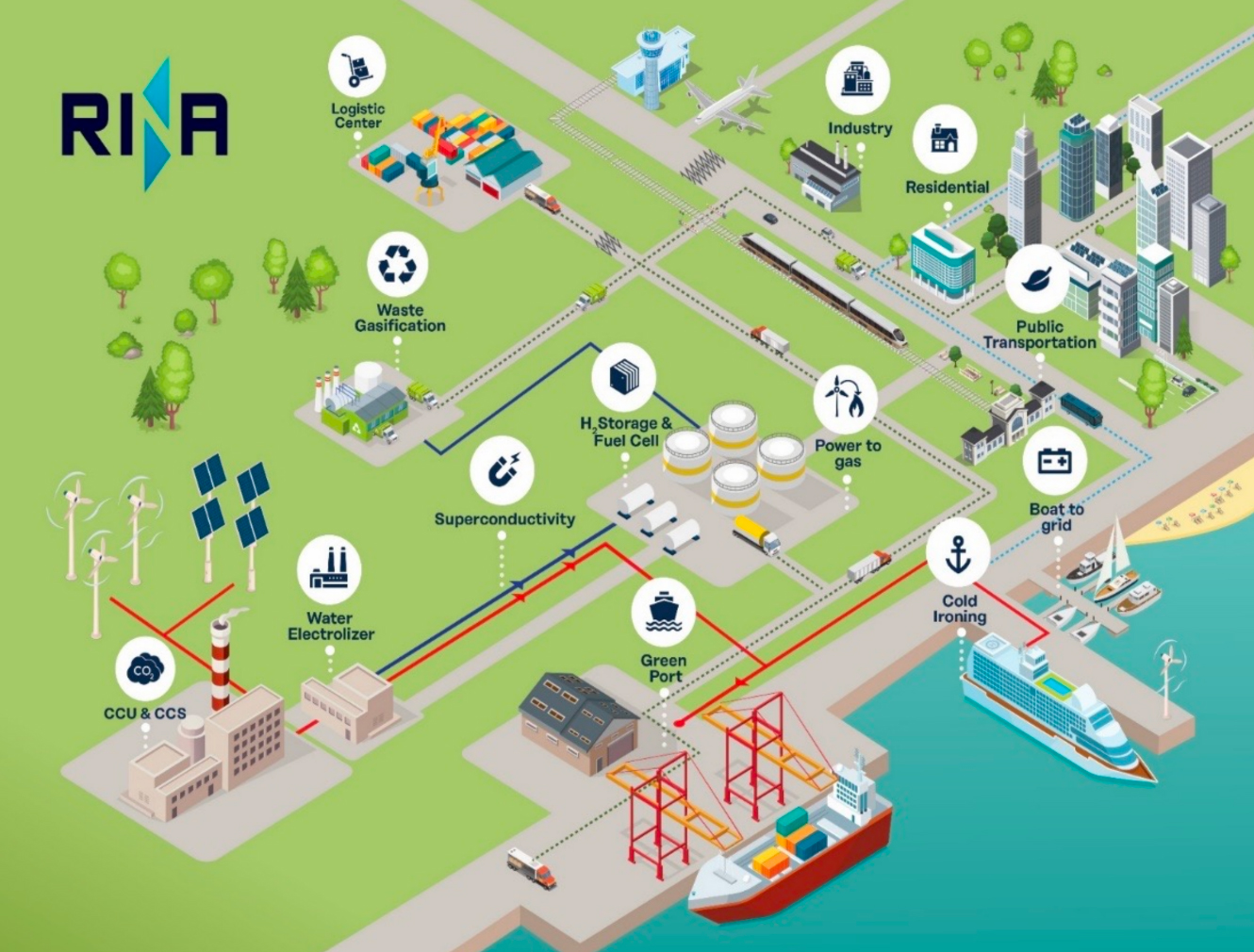